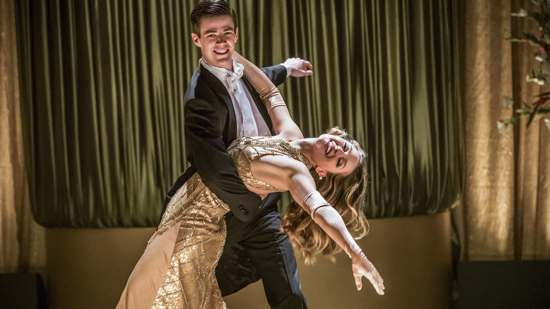 When they were still dating they went into town to see Oklahoma! Over the years they saw Carousel, and Brigadoon, and Rex Harrison and Julie Andrews in My Fair Lady, and Zero Mostel in Fiddler on the Roof, and Carol Channing in Hello, Dolly!, and the original West Side Story with Carol Lawrence and Larry Kert. My father fell asleep at Cats and my mother said she had a hard time staying awake herself.

Our stereo console was filled with “original Broadway cast” albums from all those shows and more – well, not Cats. When I was kid I would put on an album of, say, South Pacific and pretend I was Mary Martin washing that man out of my hair – oh, and I still do that in the shower some times:

“When a man don’t understand you, When you fly on separate beams,

“Waste no time, Make a change,

“Ride that man right off your range. Rub him out of your roll call,

“And drum him out of your dreams.”

Yes, I am singing as I type.

My brother and I would put on West Side Story and dance around the living room, jumping on and off the chairs and the tables and sofas and getting into a lot of trouble. Later on, my mom often took Glenn and I into town to see revivals of these shows and others. In 1966 my father was laid up with a really bad ankle sprain, so I was privileged to go with my mom to see the one and only Ethel Merman in the revival of Annie Get Your Gun at Lincoln Center.

So it’s safe to say that I grew up on Broadway musicals. And love them. I have more Broadway soundtracks on my iTunes playlist than anything else – perhaps not cool, but fuck you and your Beyonce and Adele. One of my proudest and happiest moments and one that I will remember on my deathbed is when I played Peter Pan in Peter Pan at Camp Monroe. I have also played Ado Annie in Oklahoma and every single female role in Fiddler on the Roof except for Golde (Tevye’s wife, for those not in the know). I was Miss Mazeppa, bumping with my trumpet and in full Roman centurion regalia, in Gypsy.

So it’s safe to say that I grew up on Broadway musicals. And that it has continued into adulthood and to the present day. I became mesmerized by Hugh Jackman long before he was Wolverine when John and I went to see him as Curly in a revival of Oklahoma. And I became familiar with Melissa Benoist and Grant Gustin and Darren Criss long before any of them put on a superhero costume through my allegiance to Glee. And I knew Jesse L. Martin as Tom Collins from Rent, not to mention Victor Garber from Godspell, Sweeney Todd, and the 1990 revival of Damn Yankees.

And of course I knew John Barrowman from his days as Captain Jack on Doctor Who. But I never watched Smash, so I never caught on that Jeremy Jordan could sing and dance until last week…

…which was, of course, the crossover musical episode of The Flash called “Duet.”

It started in the epilogue of Supergirl on Monday night, in which Darren Criss pops up as the Music Meister, who does “something” to Kara which places her in a seemingly coma and then pops off to find the “fastest man alive.” Meanwhile, Kara wakes to find herself in a nightclub in what looks like the 1940s, dressed in a gorgeous gold beaded gown with a man telling her that she is the last-minute opening act. She steps through the curtains, and finds herself standing in front of a microphone and an audience. She opens her mouth and…to be continued.

And on The Flash the next night…

Called to S.T.A.R. Labs because of a breach in the multiverse, they find Mon-El carrying a still-comatose Kara and J’onn Jonzz, who have come to Barry’s Earth because of the Music Meister’s claim to be looking for the Flash. The villain shows up, puts Barry into the same coma-like state as Kara, and suddenly Barry finds himself in the same nightclub as his Kryptonian friend… and she is up on stage, singing “Moon River.” (One of my favorites – from the not-musical Breakfast at Tiffany’s, in which Audrey Hepburn as Holly Golightly sings the lovely ballad, composed by Henry Mancini with lyrics by Johnny Mercer, while sitting on her fire escape and accompanying herself with a guitar.)

After Kara finishes her performance, the Music Meister pops in and tells them what’s going on – they are actually living this scenario psychically, or “in their own minds,” while their bodies lay undisturbed and inanimate in S.T.A.R. labs. Why the musical setting? Because both are deeply connected to the genre – Barry through his mom, and Kara through her love of The Wizard of Oz. They both must follow the plot of this mind-blowing musical to its end to recover and get back to the real world. Except: “If you die in here, you die out there.”

The episode is full of remarkable performances. Perhaps, at least for me, the best was the beautiful rendition of “More I Cannot Wish You” from Guys and Dolls sung by Jesse, Victor, and John. Grant’s interpretation of “Running Home to You” is heartbreaking and glorious. “Super Friend” is a treat to watch, with Grant and Melissa singing and hoofing and having a joyous time. Jeremy, Darren, John, and Carlos (Valdes) swing to “Put a Little Love in Your Heart.” And Melissa’s “Moon River” is, just, well, I just have to sing along…

“You dream maker, you heartbreaker,

“Two drifters, off to see the world.

“There’s such a lot of world to see. We’re after the same rainbow’s end,”

“Waiting ‘round the bend, my huckleberry friend,