REVIEW: Fantastic Beasts and Where to Find Them 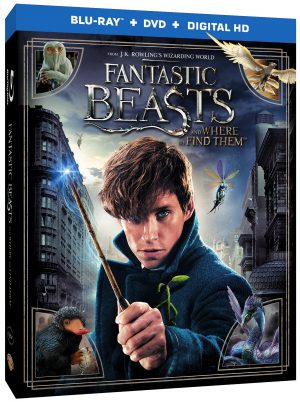 J.K. Rowling did a superb job creating her magical universe, populating it worldwide with schools, wizards, prisons, creatures, and muggles aplenty. She also gave her world a rich history and then has been mining it with spinoff works of varying lengths and media. One of the more popular has been Fantastic Beasts and Where to Find Them, taking a reference book mentioned in her Harry Potter novels and telling the story of how Newt Scamander managed to pen such a fascinating work.

Warner Bros, seeking ways to continue to profit from the film series, optioned the title and has created a trilogy with Rowling taking her turn as screenwriter for director David Yates, who directed four of the eight films. He did a far more immersive and coherent job on last year’s Legend of Tarzan.

The resulting film has grossed over $800 million worldwide so the gamble seems to have paid off and yet, the film adaptation was surprisingly lacking in charm and, well, magic.

Wisely, the story is set in America so we can see a different attitude and approach to magic as Scamander (Eddie Redmayne) has come to the States in search of more magical beasties to preserve. He has the misfortune to arrive as 1926 New York City is under attack and magic exposed to the No-Maj populace. Fanning the flames is Mary Lou Barebone (Samantha Morton), peddling the New Salem Philanthropic Society. The overly complicated plot also has a search going on for dark wizard Gellert Grindelwald and schisms within the Magical Congress of the United States of America, allowing its director Percival Graves (Colin Farrell) to conduct some extracurricular work of his own.

Coming to Newt’s aid is disgraced Aurora Tina Goldstein (Katherine Waterston), her sister Queenie (Alison Sudol), and would-be baker Jacob Kowalski (Dan Fogler), a non-maj. The Queenie-Jacob relationship is the film’s real heart and soul and I wish there was far more of that rather than sound and fury signifying how large their budget was for CGI. Everything is loud and overly prolonged without necessarily advancing character or story.

Visually, this is a dreary version of Jazz Age Manhattan which was flying high just prior to the 1929 Stock Market Crash. There are dark clouds and somber tones permeating the film, all the more to contrast with the realm where Scamander has been housing his finds, preserving them from a magical community that misunderstands and mistrusts them.

Frankly, the film, out now for home video consumption from Warner Home Video, is a messy disappointment, missing the essential elements that made the host series a cultural event. It looks good, is very well cast, and has some nice moments, but too little is explained, and there is little genuine emotion found in the overall story. Newt comes across as a brave bumbler, far from heroic, and is remarkably uninteresting compared with Jacob or even Tina.

The film is available in all the usual formats and combo packs with the Blu-ray’s high definition transfer superb enough to make every sparkle shine. The audio is a good match so families watching at home will be entertained by the light show.

The disc offers up over an hour’s worth of extras that feel more perfunctory than special. We start with Before Harry Potter: A New Era of Magic Begins (15:31), focusing on Rowling’s process; Characters (24:19), split into five featurettes (The Magizoologist, The Goldstein Sisters, The New Salemers, The No-Maj Baker, The President and the Auror) complete with actor interviews; Creatures (20:59), divided into seven featurettes (Bowtruckle, Demiguise, Erumpent, Niffler, Occamy, Thunderbird); Design (34:33), spotlighting each location (Shaping the World of Fantastic Beasts, New York City, MACUSA, Newt’s Magical Case, The Shaw Banquet, The Blind Pig); and finally eleven Deleted Scenes (14:33), none of which would have improved the film’s messy feel.