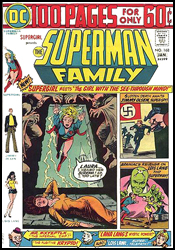 As we gird our collective loins for another presidential election season, we become accustomed to another iteration of praise for “family values.” It is a phrase that has different meanings to people of different political persuasions. To Democrats, it means a living wage and a financial safety net for the poor, the old and the infirm. To Republicans, it means no gay marriage, no sex outside marriage, and no abortion.

For me, neither viewpoint is adequate. I strive for Superman Family values.

As a woman of a certain age, I remember a comic book series dedicated solely to the Superman family. It had stories about Superman, of course, but also Supergirl, my favorite character, and Jimmy Olsen and Lois Lane and Krypto. At 60¢ (not the standard 15¢ or 20¢), this was a big, fat comic book, good for a whole afternoon.

I learned a lot about family from those books, and not just how to get some extra change from my parents.

Superman grew up with loving, principled parents in the Kents. He lived on a farm where everyone had chores that contributed to the family fortunes. He knew he was adopted, so he knew his parents really wanted him. However, since he was Kryptonian, he had powers and abilities far beyond those of his friends and classmates. His parents taught him to value his differences, but not use them to draw attention to himself for personal gain. His gifts were best appreciated when he used then to help his community.

Years later, Superman discovered he had a teenage cousin, Supergirl. He didn’t know anything about her, yet he immediately accepted her and loved her.

When he grew up and moved on to his adult life, Superman, like the rest of us, assembled a family of sorts, of people he chose. Most of this family came from the people with whom he worked, Perry White a surrogate father, Jimmy Olsen like a little brother. Bruce Wayne was his best friend, a peer who understood what it meant to live life with secrets.

As a member of the Legion of Super-Heroes, Superman had good friends who were in romantic relationships that were not only not conventionally heterosexual, but often between two different species. If this bothered him, we never saw his discomfort in the comics. He accepted his friends as they presented themselves.

Is Superman political? I have always imagined him to be a New Deal Democrat, or what the GOP today calls a “socialist.” At the same time, I don’t see him as an activist, nor even all that partisan. As Clark Kent, he votes, he serves jury duty when summoned, and he pays his taxes.

To him, family is a joy and a refuge. It isn’t something for politicians to use to bludgeon each other and score points.