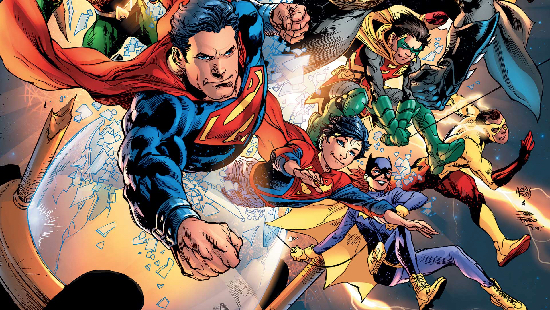 So Mike Gold, our old and grumpy and sly editor, threw down the gauntlet last week, challenging the marvelous Marc Fishman and the grammatically incorrect me to read the same comic and opine on it. That comic was DC Rebirth #1, the umpteenth revision of the company’s four-color mythos. Marc had his turn on Saturday. Today is mine.

Unlike Marc, I didn’t have travel a long and hard road 45 minutes from my suburban home to another suburb “to make a transaction.” Unlike Marc, I live in a city and the nearest comics store is three blocks away. However, I’m not a particular fan of this four-color emporium – I used to have a fantastic shop six blocks away where I browsed and hung out and bought for many decades, but it closed because of the owner’s illness – so I downloaded and read the e-comic version.

The artwork, by Gary Frank, Phil Jimenez, Ivan Reis, Ethan Van Sciver, Brad Anderson, Jason Wright, Joe Prado, Matt Santorelli, Gabe Eltaeb, and Hi-Fi Colorists, is brilliant, breathtaking, and inspiring. It’s clean, it’s sharp, and it’s spectacular. The storytelling is so fantastically good that no writing is even necessary to follow the story, and every emotional nuance is there in the faces of every single character, from cameos to supporting characters to the “all-stars.”

That writing, by Geoff Johns, is no less than anyone would or could expect from a man who is a master of his craft. As Marc said, and as I concur, “Geoff [Johns] made his career (in my humble opinion) – and also im-not-so-ho, and c’mon Marc, don’t be so modest or polite! – on harnessing emotion and sewing it into the rich tapestry of DC’s long-standing continuity.” Geoff also has the writer’s gift of building tension, that all-so-important command of plot that keeps the readers engaged and turning pages, while not forgetting those common-to-us-all integral and humane emotions that unite us with our fictional avatars, doppelgangers, and heroes.

And weaving through all of this is an understanding of the complexity of the DC universe since the hallowed days of Crisis on Infinite Earths collapsed it all into a ball of wax, and playing on his loom to bring it all back into one single tapestry.

The climatic and emotional moment in which Wally West reconnects with Barry Allen, his uncle, his idol, and his mentor, is so! right-on! bro! that even I, jaded and cynical and world-weary, felt a wee bit of the emotional lumping in throat. Barry Allen was the Flash I knew and loved, the symbol of the Silver Age of DC, that – if you’ll excuse the expression – golden era of my life in which I discovered and fell in love with comics and their universes of imagination and adventure.

His was the lynchpin that kept it all together, and when that lynchpin was pulled from its place, it all fell apart for me. Supergirl was gone, the Legion of Super-Heroes were strangers, and Superman and his family (Superboy, Krypto, Ma and Pa Kent, Lois, Perry, Jimmy, Lana, Lex Luthor, Lori Lemaris, Lyla Lerrol, Jor-el, Lara, Lex Luthor, Lena Thorul, everyone! – along with his hereditary planet of Krypton, were all just one disjointed mess of a fallen soufflé. It was, in too many ways, just one big funeral.

Though I realize for purposes of plot, for purposes of story, for emotional climatic wallop, and for purposes of cleaning up the mess of the fallen soufflé that the DC Universe has become, it was (and is) necessary for ReBirth #1 to wind its way through the many layers of said soufflé, giving acknowledgement to everything that has come since 1985 and Crisis – especially the “Dreary52.”

However, the almost biggest pitfall of the storyline is that Wally, struggling to survive in and escape from the Speed Force before he succumbs to death, isn’t immediately drawn to the man who gave him everything that he was and became, not only as a man, but as Kid Flash and then as the Flash. Given that it is this rich, undying love and bond between the two that saves both Wally and Barry from the Anonymous “what and who” that threatens on the nearing horizon, it just doesn’t make sense.

If the answer to the “Big Bad” is, as Marc said (and to paraphrase) “hope, optimism, love, friendship, kindness, and heroism,” then doesn’t it seem that all of Wally’s attempts to “reach out and touch someone” are useless fodder that merely stuffs 81 pages with folderol? As I read it, it is really Wally’s soul, not truly his physical body, his very being, that is being torn apart and filtered into the Speed Force (art not withstanding); and if that being does not want to go, fights for survival, would not it first and foremost search for that anchor which means the most to it, that gave it meaning to exist in the very, very, very, very first place?

But of course that would have been a different story.

My absolute B-I-G-G-E-S-T problem with the story is the inclusion of the Watchmen. Okay, okay, I know, all we see is the blood-dropped Smiley Face. But Watchmen was, and is, a singular novel, existing outside the DC Universe – in fact, it was Alan Moore’s adaptation of the old heroes of Charlton Comics which had been acquired by DC Comics. It had, and has, absolutely nothing at all to do with the mythos of the DC universe. It stood, and stands, on its own, and is considered by many critics as one of significant works of the 20th century. It was chosen by Time Magazine as one of the “All-Time Novels” published since the magazine’s founding in 1923. Here is what critic Lev Grossman wrote when the list was published in 2010:

“Watchmen is a graphic novel – a book-length comic book with ambitions above its station – starring a ragbag of bizarre, damaged, retired superheroes: the paunchy, melancholic Nite Owl; the raving doomsayer Rorschach; the blue, glowing, near-omnipotent, no-longer-human Doctor Manhattan. Though their heyday is past, these former crime-fighters are drawn back into action by the murder of a former teammate, The Comedian, which turns out to be the leading edge of a much wider, more disturbing conspiracy. Told with ruthless psychological realism, in fugal, overlapping plotlines and gorgeous, cinematic panels rich with repeating motifs, Watchmen is a heart-pounding, heartbreaking read and a watershed in the evolution of a young medium.”

And though, yes, Time Magazine is part and parcel of that “huuuuge” – I just had to get my Trump dig in – mammoth known as Time-Warner, of which DC Comics is also a flea in that mammoth’s wooly hide, it’s pick to be on that list was not influenced by its publishing house. There are many books on that list without “Warner Publishing” on their copyright pages.

It is crass and mercenary to me, not to mention oh-so unimaginative, that DC has the chutzpah to claim literary ownership (if not copyright rights) to a work that is included with such masterpieces and classics as Animal Farm; To Kill a Mockingbird; The Great Gatsby; The Grapes of Wrath; One Flew Over the Cuckoo’s Nest; On the Road; Mrs. Dalloway; Are You There, God? It’s Me, Margaret; and Beloved.

Blood-spattered Smiley Face also telegraphs to me that the “Big Bad” will have something to do with the machinations of Adrian Veidt, a.k.a. Ozymandias, of whom Dave Gibbons, artist of Watchmen, said: “One of the worst of his sins [is] kind of looking down on the rest of humanity, scorning the rest of humanity.”

Hmm. If I may digress here for another moment of Trump-O-Rama: “Sounds familiar.”