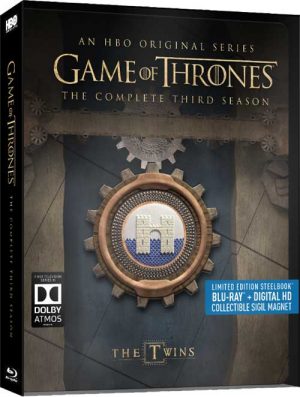 Game of Thrones has certainly become a cottage industry, spewing forth all manner of collectible and universe expansion, all attempting to profit while filling the void as everyone awaits the sixth volume from writer George R.R. Martin. The next such offerings come from HBO Home Entertainment as they release the steelbook editions of seasons three and four on June 7.

Like the first two seasons, already available, these offer up a few bonuses for collectors or audiophiles. First, the Blu-ray sets are entirely the same as the already available sets with the one difference being that they have all been remastered to offer up Dolby Atmos, the immersive sound system. While PR surrounding the release says you need specific Atmos-enabled AV receivers, other models do access the new soundtracks to full effect (or so the experts tells me).

All ten episodes per season are present along with all the extras. If you don’t care about the Atmos soundtrack, then consider the steelbook packaging, complete with collectible plastic magnets. Consider this, the standard Blu-ray combo pack comes with the DVD and Digital HD copies listing for $50.99 while the steelbook version, without the DVD version, retails for $79.98. Now, yes, they will be heavily discounted but consider what you want as part of your video library.

Season Three, The Twins, comes with the sigil of House of Frey which is appropriate since this was the season of the memorable Red Wedding, drawn from the first half of A Storm of Swords. 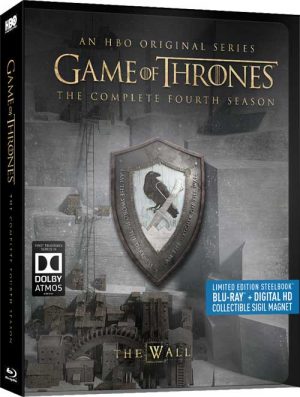 The Wall, the Fourth Season, focuses on the Night’s Watch and the magnet here features a crow and Jon Snow’s sword, Longclaw. This season drew its material from the second half of A Storm of Swords, along with elements of A Feast for Crows and A Dance with Dragons.

For the record, seasons one and two came out in November and offer the sigils of House Stark and House Lannister. All four magnets and the steelbook covers are all derived from the immensely watchable opening credits as designed by the Emmy Award-winning firm Elastic. Inspired by the maps that were found in each book of the series, designed by Jonathan Roberts, each episode spotlights different portions of the world that are featured in that episode. There are rules for their usage as outlined by the producers and a complete list of which countries appear on which episodes can be found at the Game of Thrones wiki.

The series certainly bears rewatching to enjoy the performances and relive thrilling moments. The story is rich enough that you can enjoy the foreshadowing and clues laying the ground work for what follows.