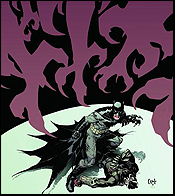 I’m enjoying the back-and-forth between my fellow columnists Marc Alan Fishman and Michael Davis regarding DC’s New 52, but now it has come to the point where I must give Marc, ComicMix’s own Snapper Carr, some love.

For a third of a year Marc has been singing the praises of the New 52 Batman to me. I’ve been reluctant to read it despite the fact that I enjoy friends’ recommendations and I respect Marc’s opinions. I’d respect Michael Davis’s opinions as well, if he ever had any. No, my problem is that Batman was one of my favorite characters until the rank and file turned him into a guy who was just as psychotic as his cadre of evildoers. That created a domino effect: the villains became psychoticer. This is the exact opposite of what happened to Mickey Mouse in the 1930s.

Fans of this stuff attacked me as an old fart who wanted the Bat to be like the 1960s teevee show. No; I’m older than that. I grew up a precocious reader during the waning days of Bill Finger and Dick Sprang and stories that were geared to a solidly pre-adolescent audience. If I had my druthers I would wipe out the past 10+ years of Bat-tales and go back to the approach best presented by (in alphabetical order) Adams, Aparo, Englehart, O’Neil, Robins and Rogers, et al. Barring that, I’d take my lead from the Batman of the animated show as professed by (in alphabetical order) Burnett, Dini, and Timm, et al. Of course, some of those efforts were adaptations of the works of Adams, Aparo, Englehart, O’Neil, Robins and Rogers, et al.

Besides, I thought “the New 52 Batman” referred to the number of Batsmen who currently inhabit DC’s new universe. How many Batmen are there today? I have no idea. I can’t count how many were there the day the previous DCU got itself ignored. Evidently, somebody thought Photoshop was for ideas and concepts as well as art. So, with all this hoo-hah between Messrs. Davis and Fishman, I decided to read the New 52 Batman. Keep in mind: I italicized “Batman,” so I’m onlyreferring to the Batman title per se. I have yet to read Detective Comics, Batwing, Wolverbat, or Batpool.

Damn. Score one for our Earth-ComicMix Snapper Carr. Batman has a Batman that isn’t an asshole. That, alone, goes a long way to restoring my faith in the character, DC Comics, and the concept of “the child is father to the man.” Like the rest of us, I have no clue how this ties into that which may or may not have gone before, but Bats is more human and less lunatic. He – or rather Bruce Wayne – is the subject of a deadly conspiracy by something called the Court of Owls (please don’t tell me that’s going to tie into the forthcoming and ill-advised Watchmen prequel). He seems a bit high-techier than he was before, and Alfred has less need to play off of Batty’s psychoses and is a better character for that.

Most important, the Batman Batman is a hero. Hero is a term of respect we bestow upon those who have earned it. A hero need not be a nice guy, but he/she/it should be, at heart, a decent human being. So far, after four issues, this Batman is a hero.

Thanks, Marc. Michael… your turn. Make a heartfelt recommendation.