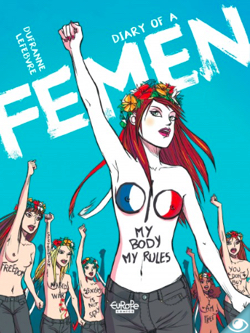 Time to hurl a hand grenade.

Some portions of the modern American feminist movement – which is not and has never been a monolithic force – conflate sex with sexism. Others in this movement think they are two different things. To me, it’s all about choice and, as Margo St. James said, “call off your old tired ethics.” At the very least, stop telling consenting adults what they can and cannot do with their own bodies, lest you be thought of as a Republican.

For those still with me, I’d like to bring to your attention a graphic novel published in Europe two years ago but just made available digitally by Europe Comics called Diary Of A Femen, by artist Séverine Lefebvre and writer Michel Dufranne. Europe Comics describes the story as “A fascinating album (we call ‘em graphic novels out here in Americanland) that helps us understand the inner workings of the controversial feminist organization… Five female characters combating stereotypes.” The story is based upon the real and controversial Femen movement(s) and the creators’ involvement with some movement members.

And, check this out, boys! It’s got naked titties! Whereas that might alienate some of its potential readership here in the States, I maintain that breasts are not inherently sexist and, hey, maybe those boys will learn some important stuff. I know I did, and I’ve been a fellow traveler with the feminist movement for, gasp, about a half-century. 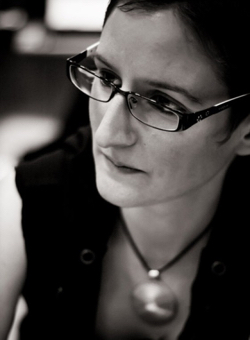 Diary Of A Femen is about a young woman named Apolline, and it is her story. It is not the story of the movement and certainly not of feminism in general: this is a story about a real woman who endures the real travails of life. As such, the first 12 story pages detail the routine life of a young, attractive woman and, despite all outward appearances, that routine is pretty dreadful. If you’ve never fully understood the day-to-day meaning of being a sex object – being objectified by people (notice I didn’t say “men”) who are so accustomed to the societal perception of women that they don’t understand how they’re at fault. Apolline has a routinely bad day, but this time she decides to check out an organization that purports to change that.

Their mission has real meaning to Apolline, filling a hole in her life she knew was always there but hadn’t done anything about – as of yet. Joining a Femen meeting to see what it’s all about, she is warned that by becoming an activist she will take on the very, very real risks of losing her job, her friends, her family and, possibly, her freedom. She takes on these risks and goes through the intensive training one must go through to be a functioning street activist. She then joins the group for public protest… and that is where the proverbial shit hits the fan.

Apolline comes off very, very real, and what happens to her and the decisions she makes are equally real. So is the activist training, planning and risk-taking; I found that to be surprisingly accurate. And her story might not end the way you expect.

This is a very worthy book that tells a fascinating story in profoundly professional terms. So call off your old tired ethics, buy Diary Of A Femen, download it onto your computer or tablet, and read it with the intention of learning something. You will.

And yes, kids. It’s in English.