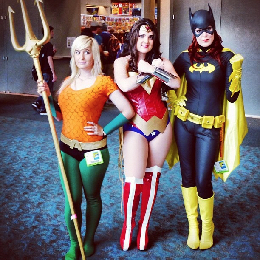 So far this summer, it has been my privilege to only go to one comic book convention, one that was conveniently situated in my home town. I may have to go to more, because that’s what the job is, and I’m okay with that.

It’s become so much easier to be a woman at a comic convention. Sure, the lines at the bathrooms are a drag, but that’s a small price to pay for being an accepted, sometimes even welcomed part of the crowd. As I write this, I’ve read several accounts (none of which I can find now, naturally) that suggest that attendance at the major shows is at least 50 percent female.

They need us. All of them: show organizers, retailers, other exhibitors. Without us, they make so much less money.

A lot of people have done a lot of work for decades to get us to this point. We should thank them and savor their success.

And then we should try for more.

Among the women who work in comics that I’m linked to online, this article made the rounds last week. It tells how women in the tech industry, infuriated that so few women were ever asked to speak at industry conferences as anything but tokens, and what women decided to do about it. They want full parity with men on all panels at conventions and conferences.

Quite often, convention programmers will say they don’t know any women in the industry, nor do they know how to find them. The women in the link are assembling such a list.

Women in comics are doing the same.

It might not be possible, at this exact moment, to get as many women writers and artists who attract fans as men. I get that. It’s kind of circular: If women were hired more frequently, there would be more top-tier women creators. And I think that day is closer than most imagine.

More recently, there has been an increase in the number of women working for distributors, libraries, and opening their own stores. Again, lots and lots of good conversation.

Just because it’s going to be difficult doesn’t mean it’s not a worthy goal, meriting our time and effort. We’ve shown that women add to the fun of a convention, and add to the bottom line as well. We should use the power of our purses to push for more.