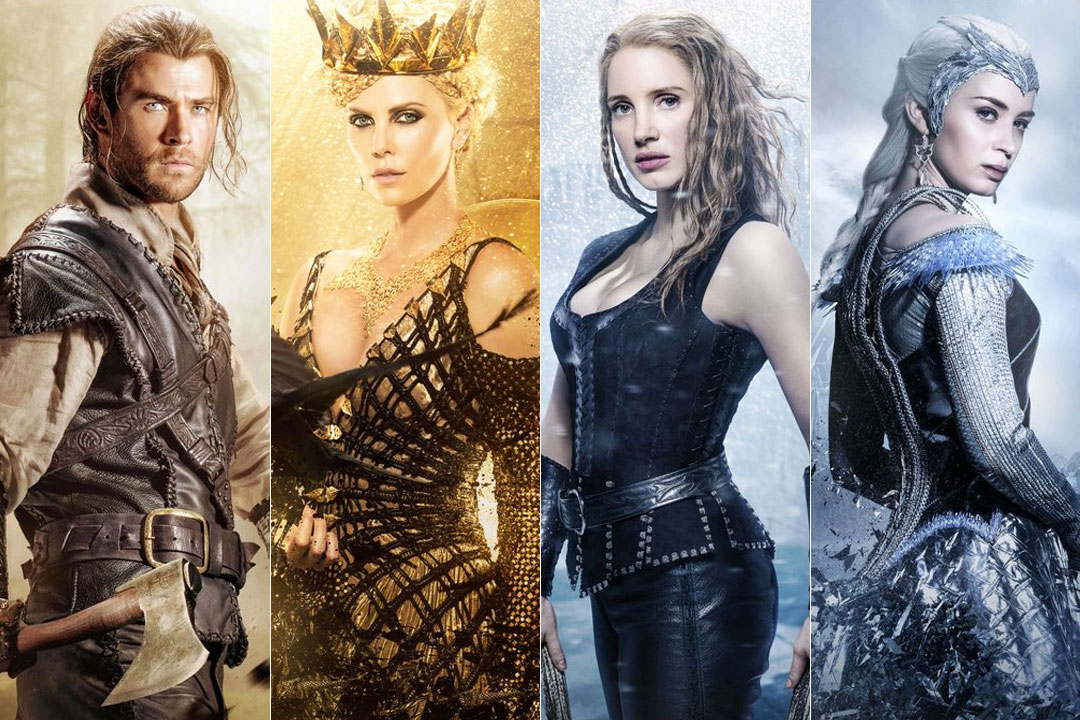 In my first year of reviewing movies I ranked Snow White and the Huntsman as the ninth worst movie of 2012 and by that time news had come out that neither star Kristen Stewart nor director Rupert Shane would be returning for the sequel, and I predicted that it would probably be a better movie. I was right, The Huntsman: Winter’s War is a better movie, and it still isn’t a very good movie.   Freed from trying to retell a more famous story, there are some interesting choices made in the script— but it’s all overwhelmed by the crushing clichés of high fantasy. At its lowest points Huntsman is the slickest Lord of the Rings fan-film you’ve ever seen; at its highest it’s a kind of cute romantic comedy starring Nick Frost.

The Huntsman: Winter’s War wraps around the first movie with a little bit of an origin story and then the kind of sequel where you barely need to bring any of the cast back. The story now revolves around a previously unmentioned northern kingdom ruled by Freya (Emily Blunt) the ice witch sister of the evil queen Ravenna (Charlize Theron) from the first film. Freya has a plotline so similar to Elsa in Frozen that it feels like the script was written by lawyers, everything feels just distinct enough while still constantly threatening to break in to a chorus of “Let it Go” at any moment. Freya, it conveniently turns out, raised and trained a whole army of Huntsmen (and Huntswomen) and her sociologically fascinating but completely implausible ban on the very concept of love ends up driving away Eric (Chris Hemsworth) and starting him on his journey that leads him to the first movie. We then skip ahead to after and Eric with one of the eight dwarfs from the first movie (Nick Frost) plus a new dwarf (Rob Brydon) end up on a convoluted quest to rescue the evil magic mirror to save the completely absent Snow White and save the world, I guess. Sara (Jessica Chastain) is Eric’s presumed dead wife who saves his life at a miraculous moment, and then just a bunch of fantasy junk happens until they have to wrap it up.

I feel like a crazy person typing all that up. There’s just an insane amount of idea bloat in this film and it struggles to find a focus.

Some of that struggle for focus is the result of not having a clear protagonist. Going strictly by the screenplay writing books it’s Freya, because it is the change in her attitude that allows the climax of the movie to happen, but she’s practically a Bond villain in terms of her scheming for the rest of the film and it’s hard to feel particularly invested in the well-being of someone who keeps a room full of people turned into ice sculptures. In terms of screen time (and billing) it’s Eric, but he doesn’t change his attitude one iota through the film— he’s right about pretty much everything all the time and is super capable and has no need to improve, he’s Aragorn with an axe. It’s probably supposed to be Sara, she has a clear narrative arc and she has the biggest impact on the events of the film but they try so hard to obfuscate her actions and intentions that it’s hard to connect with her. That along with the stilted narrative structure leaves the movie feeling like a series of vignettes and not like a cohesive narrative.

I did genuinely enjoy the love story between Nick Frost’s dwarf and Alexandra Roach’s. It was cute, and it felt clever, and most importantly… it didn’t feel like it was shaken out of the fantasy magic eight ball like every other piece of Winter’s War. It was the only thing that felt genuine or surprising. This was a movie full of twists and every one of them was telegraphed so far in advance and the one that might have been surprising was shown in its entirety in the trailer for the movie. That simple, silly love story was the only thing I liked, the only thing I will remember fondly in this overplotted mess, but it deserves to be recognized. If the next movie just takes those two characters I’d be first in line for more; otherwise, please put this series out of its misery.