Last month we said goodbye to the great comics artist, Murphy Anderson. He had such a body of work, and given his impressive talents, it’s not surprising that he was working as a professional comics artist over six decades.

My gorgeous wife, Kathe, had come to love Murphy too. She was so impressed with the man, his lovely wife Helen and his son, Murphy Anderson III. (This is one case where you can’t parrot that old saw, “There will never be another Murphy Anderson” – because there is!) She and I were talking to some friends about Murphy’s passing and we were trying to put it into perspective for these folks who weren’t comic fans. I stumbled into the analogy that Murphy was the “Tony Bennett of comics.” Upon further reflection, I think that’s pretty fitting. He was the consummate professional, always delivering high quality work and was always consistent. He never changed his thinking to bend the times – neither in his art style nor his thoughts on how a professional presents himself. And like Tony Bennett, Murphy was humble, warm and charming.

But even though he never changed what he did or how he did it, Murphy leaves us with a rich scope of non-traditional work.  Oh, sure, if you’re feeling nostalgic for the great man you can pull out some old Hawkman stories or Buck Rogers strips. But this week we’re going to celebrate some of Murphy’s non-traditional work!

You probably know that MS Magazine proudly debuted with a Murphy Anderson cover featuring Wonder Woman. I wouldn’t have been in their target demographic, but I know I would’ve bought this issue! 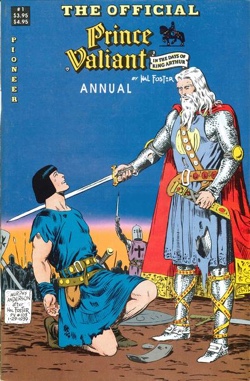 It’s hard to believe, but in the days before Instagram and cellphones, folks used to read print material when they were just hanging around. The Army knew this and created PS Magazine, a hybrid of information for the serviceman told in a light, engaging comics style. You probably know that Will Eisner worked on this, but did you know that Murphy Anderson managed the contract for years afterwards?

Sometimes an advertised product looks nothing like the real thing. Safe to say that no kid’s finished model kits looked as good as they did in the ads in which that Murphy Anderson provided the art.

In the 90s, Alfred Harvey rebooted a family property: the original Black Cat. Mark Evanier was the scripter and Murphy Anderson was the interior artist. Although not known for rendering vivacious women, Murphy could rev it up when needed (see my previous column on his stunning depiction of the lovely Dejah Thoris) and he sure did here. Keep an eye out for this gem (Alfred Harvey’s Black Cat: The Origins) when you’re diving into the back issue bins.

You might have known that Murphy provided the packaging artwork for Captain Action, but did you know he also provided stellar artwork for the companion Super Queen’s line? It included lovely images for Supergirl, Mera, Batgirl and Wonder Woman.

Seduction of the Innocent

Do you love Craig Yoe’s IDW reprints (Haunted Horror and Weird Love) as much as I do? Back in 1985, Eclipse did a similar thing with their Seduction of the Innocent comics. Issue #2’s cover features the lovely Gloria Wheeler, Interplanetary Girl Reporter using elements from the 1950s story called “The Space Treasure.” The whole story, with robust Murphy Anderson pencils and inks, was originally printed in Standard series called Fantastic Worlds.

Now, before I wind it up, I might need to remind you that Murphy, the quintessential gentleman, was a Tarheel… and the University of North Carolina’s team color is baby blue. There’s an old saying in the south, “God so loved Carolina, that he made the sky Carolina Blue. There’s should be a corollary to that, something along the lines of: “God so loved the comics industry that he gave us Murphy Anderson.”