Mindy Newell: Eat, Drink, And Be Merry, For Tomorrow… 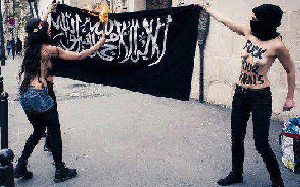 This is the real world, and it will take more than Peter Capaldi’s breathtaking performance and a great, great episode of Doctor Who to change the minds of radical splinter groups bent on war to realize that the box – both of them – is empty.

That’s what I wrote in my column last week. And my words proved too Goddamned prophetic just four days later, when Paris was attacked by ISIS.

The official death toll as I write this on Sunday afternoon at 3:39 is reported as “129, with 352 injured and 99 in critical condition.”

But that doesn’t take into account the psychological and emotional injuries suffered by the parents and brothers and sisters and aunts and uncles and fiancées and boyfriends and girlfriends and college pals and the citizens of Paris, France, and the world.

Like clockwork, some of the Repugnantican politicians jumped in to take advantage of the carnage.

Ben Carson: “If we’re going to be bringing 200,000 people over her from that region – if I were one of the leaders of the global jihadist movement and I didn’t infiltrate that group of people with my people that would be almost malpractice.”

Donald Trump: “When you look at Paris  –  you know the toughest gun laws in the world, Paris  –  nobody had guns but the bad guys. Nobody had guns. Nobody,” Trump said at a rally here. “They were just shooting them one by one and then they (security forces) broke in and had a big shootout and ultimately killed the terrorists…You can say what you want, but if they had guns, if our people had guns, if they were allowed to carry, it would’ve been a much, much different situation.”

Carly Fiorina: “I am angry that Barack Obama and Hillary Clinton declared victory in Iraq in 2011, abandoned all our hard-won gains for political expediency and contract to the advice of our generals, thus leaving vast swaths of territory and too much weaponry to be gobbled up by ISIS,”

And former Republican Governor of Ohio John Kaisch proved that he doesn’t have a chance in hell of becoming President, when he said, “Today is a much different day. It’s a somber day. It’s a tougher day. And for me it’s really not a day of politics or promoting a candidacy,” as was Carlos Lopez-Canteria (Lieutenant-Governor of Florida) who said it was “not the day” for criticism.

Okay, you can accuse me of being a major hypocrite here, as I am certainly full of slanted political criticism today. But I am just so sick and tired, so absolutely fed up, just so fucking pissed off about the total inability of this country’s so-called leaders to sit down together and figure out what the fuck! we are going to do? about the biggest threat to sanity and civilization since Adolf Hitler and World War II engulfed the world.

Yesterday, John Ostrander mirrored my emotional reaction to Paris in his column. And the only thing I will add to his brief history of how we got here is that none of this started with President George W. Bush and his “Project for a New American Century” administration cronies. It started after World War I, with the destruction of the Ottoman Empire and the division of its territory into make-believe countries by the winners without regard to the social, political, or religious needs of the indigent peoples of those regions.

I said this same thing 14 years ago, a day or two after 9/11, to my father, essentially calling out the West.  “We’re paying now for what they did,” I said to him.

He said, “You’re right, but keep your mouth shut.”

And I keep thinking about how it is said that the “final battle” will start in Syria, and end on the plains of Megiddo (from whence the word “Armageddon”), which is in modern-day Israel.

And, like John, I too keep singing “it’s the end of the world as we know it.”

Only we don’t feel fine.