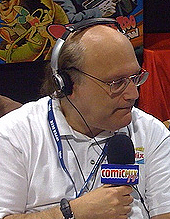 Back when we started out, ComicMix used to run all these fabulous columns written by all these swell writers and, well, by me too. Those columns disappeared after about a year and a half and a lot of people told us they wanted ‘em back. Among those people were most of the columnists themselves. And me. Man, I bitched up a storm. And nobody can bitch up a storm like me.

So we re-geared out operations (that term creates the ambiance that we actually have a clue as to what we’re doing), and, effective right now, we’re reinstating our daily columns. Joining returning writers Dennis O’Neil, John Ostrander, Martha Thomases, Michael Davis and myself are two newcomers: Marc Alan Fishman and Mindy Newell.

You know Marc from his frequent contributions to ComicMix. He’s just a kid, which is weird because his wife is pregnant with a smaller, younger kid. A life-long comics fan who knows his barbecue, Marc is part of the mighty Unshaven Comics crew. That’s at www.unshavencomicsonline.com, where he’s joined by his buddies and my pals Matt Wright and Kyle Gnepper. Together, they publish indy comics that are truly worth reading; that’s how we found Marc in the first place. Check ‘em out at their website.

Chances are pretty damn good you’ve also heard of Mindy. She’s making her return to comics here at ComicMix; she spent about five years editing at Marvel Comics and ten years writing such features as Wonder Woman, Catwoman, the Legion of Super-Heroes, American Flagg!, Daredevil, Black Widow, The Next Wave… you get the idea. She’s also an operating room nurse, which I think might come in handy around here. Somebody told me – I think it was Mindy – that I cannot live on barbecue alone. I try.

We’ll be focusing more solidly on comics than we did last time around. Not to say we’ve abandoned the heavy political/social stuff: Martha, Michael and I have been writing those type of columns every week for www.michaeldavisworld.com for a couple years now and we’ll be continuing to do so until we get arrested for sedition.

But here at ComicMix we’ll be mostly talking about comics and directly related media and phenomena. We’ll probably be talking about the comics related movies and teevee shows and, if we can find somebody wealthy enough to buy tickets, even to comics related Broadway plays. Perhaps I’ll even do an expose about just how many Wonder Woman statues a 35-year-old woman can squeeze into her basement apartment.

Most important, we invite you to join in on the fun. We’re in for some hectic times in the greater comics world. DC is recreating itself again, and Marvel going nuts with special events. Everybody’s got something new, and new publishers continue to pop up like rabid Whac-a-Moles. Please feel free to comment until your fingers fall off. It’s probable that the relevant columnist will play in and we can get a nice little dialog going. Think of ComicMix as sort of like Twitter with an attention span.

And bring along your sense of humor.