I hate being bored, so over the years I’ve managed to shorten my attention span to the point when the good stuff runs out, so do I. Therefore, from time to time I have a little to say about a lot of things. For example: 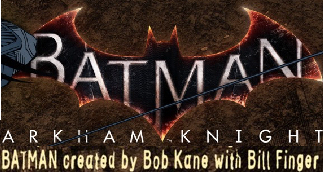 DC / Warner Bros finally gave credit where credit has long been due: appending Bill Finger’s name to Bob Kane’s as the men who made Batman a Day-One success. It is marvelously ironic that the first time I’d seen the “Created by Bob Kane with Bill Finger” line was on Cartoon Network’s Robot Chicken DC Comics Special 3: Magical Friendship, which, for the record, I enjoyed – certainly a lot more than the second one. Hawkman vs Robot Chicken? Priceless. Anyway, Bill’s name is supposed to be deployed in similar fashion on all future Batman stuff, including their electronic comics (left). It’s about time. And lawyers. And egos. 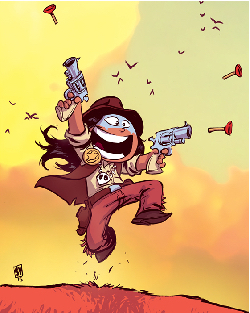 I’m looking forward to Marvel’s upcoming Red Wolf series, even though it clearly indulges in usually needless future-continuity winks such as Sheriff Steve Rogers and Mayor Wilson Fisk. Nonetheless, I’ve always been amused to see the standard Marvel heroic fantasy from the standpoint of earlier times – 1872, in this case, or World War I or whathaveyou. Our ComicMix pal John Ostrander has written more than a few of these for Marvel and they always conveyed a sense of fun. Same thing with Howard Chaykin. Red Wolf might be a little-remembered Marvel character – as was the Phantom Eagle – and I have no doubt there likely will be some sort of SHIELD reference. OK, that’s part of the fabric of the Marvel Comics Universe and sometimes it’s difficult to by-pass the opportunity to get cute. If this new series is half as much fun as Skottie Young’s variant cover (right), it’ll be completely worthwhile.

Hey, Supergirl teevee producers! If you actually say the word “Superman” on your television show, just who is going to sue you? Warner Bros? Well, actually, I know one producer who wound up being sued by his own company, so I shouldn’t be quite so sarcastic. But, hell, I am who I am. After a while going so far out of your way to not say “Superman” takes the viewer out the story. If you don’t want to say Superman, you shouldn’t be allowed to use the Big Red S. It was very conspicuous by its absence. And annoying. 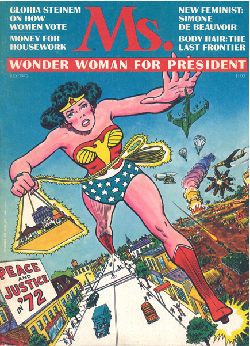 On the other hand, I’m surprised I’m enjoying Gotham so much this season. I was ambivalent about it after the end of the first season, but two weeks into this season ComicMix columnist Marc Alan Fishman said I should check it out. He was right: the show improved significantly, particularly with respect to Bruce Wayne and Jim Gordon. Of course, the addition of Michael Chiklis to the cast as Gordon’s boss also added to the fun. The story itself ebbs and flows and is too often carried by bravura performances by Chiklis, Sean Pertwee and Robin Lord Taylor – not to mention Carol Kane, who is a national treasure. But it’s fun.

Ed Catto did a wonderful tribute to Murphy Anderson in this space a few days ago, and I second each of his statements. I’d like to bring to your attention his work on a different piece of our modern history. The very first issue of Ms. Magazine featured a story abut Wonder Woman, a worthy idea for the start of America’s first mass-market feminist magazine. The cover featured one of the best Wonder Woman pieces I’ve seen. This cover (left) was penciled and inked by my old friend, Murphy Anderson. Of course we will miss him, and of course he left us with a lifetime of wonderful artwork. A true master of our medium.