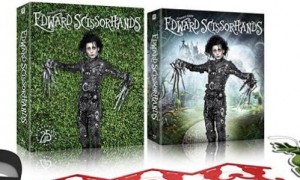 Too often filmmakers interpret or reinterpret works from other media, nowhere near often enough creating new characters and situations. Look at Tim Burton, for example, he started off taking Pee Wee Herman and producing a feature version of his television series. He returned with the original and still funny Beetlejuice before tackling his version of Batman. Since then, he has not given us anywhere near enough original fare but all can be forgiven if you pause to consider Edward Scissorhands. Thankfully, 20th Century Home Entertainment has seen fit to cause us to consider the film since it has released Edward Scissorhands: 25th Anniversary on Blu-ray. 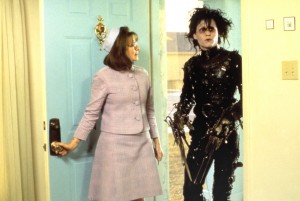 When it opened a quarter century back, I adored it, calling the Johnny Depp vehicle as a modern day fairy tale and it still holds up. I last watched it two years ago, showing it to my 9th graders as part of a film unit. They were taken by the visuals and the story, the timeless look of suburban America and the universal theme of fear of the unknown.

Up on the mountain outside the small community, an inventor (Vincent Price) has created life but lacked the ability to complete the boy (Johnny Depp), giving him a variety of shears for hands. In time, just before he could apply the hands as a birthday gift, the man dies of old age and Edward lives in the musty castle all alone. That is, until local Avon saleswoman Peg Boggs finds him and decides to bring him home to live with her family: husband Ed (Alan Arkin), shy daughter Kim (Wynona Ryder), and son. 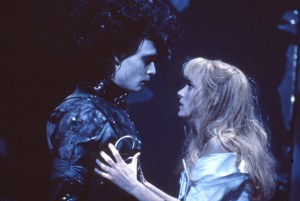 Once they and their neighbors see Edward can use his bizarre appendages to design gorgeous topiary, they flock to be near him. He goes on to become a much-desired hair dresser, revealing new aspects of each woman’s personality. Along the way, he continues to long for Kim, who is freaked out by him, and prefers the company of her stoner, small-minded friends.

Then things take a turn for the worst and suddenly Edward is haunted, haunted, and literally run out of town for being too different. It is very much representative of the 1950s mindset although the pastel color scheme has a more timeless feel. The lovers are separated by fear and hatred giving us a bittersweet ending, without a happily ever after.

The film is narrated, much like a good old fashioned fairy tale, by a grandmother, and frames the tale as something magical.

Visually, the movie has Burton’s usual quirky sensibilities but they’re strong and totally appropriate to the subject matter. The Danny Elfman score is also pitch perfect.

Fox has remastered the film and it sparkles in its AVC encoded 1080p transfer in 1.85:1.  The DTS-HD Master Audio 4.0 track is a match to the visuals and it is a joy to watch.

Given the film’s age, there’s little surprise that the special features are a meager lot. It starts with a standard EPK package (4:39). We also have Theatrical Trailers (4:17).  There are commentaries on separate tracks from Burton and Elfman, which can be interesting but far from revelatory. An anniversary package deserves a little more TLC so it’s a wee bit disappointing but overall, this is well worth having.