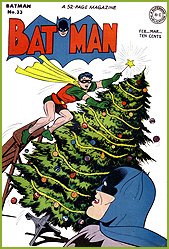 If memory serves – and how often does that happen? – I saw my first 2012 Christmas decorations in late summer. In Miami, maybe? At the merchandise mart that adjoined the convention hotel? Anyway, months before anything resembling the start of the Holiday Season, which seems to have climbed into the vicinity of Halloween.

(And are you now bracing for one of my hate-Christmas screeds? Am I preparing to validate Fox News’s diatribes against The War On Christmas, ho ho ho? Naw. Maybe next year.)

What I am wondering, though, is whether any of our comic book bretheren still produce the annual Christmas story. In fact, I’m wondering if they ever did. I know that I wrote at least a couple of them, two featuring The Dark Knight (ah, but was he a silent knight? a holy knight?) and a third, I think, starring one of his favorite adversaries, that feminine feline funster, Catwoman. Two of these were commissioned, produced by editorial fiat, and what the hell? We’re pros, right? Guy behind the desk says Christmas story and we say, how many pages and when? The other, a Batman, may have been my idea, or, more likely, it may have originated with My Favorite Editor, Julius Schwartz.

And, o holy holly, while typing the above, I forget the weirdest Christmas-Meets-Batman of them all: A Slaying Song Tonight. This eight-pager appeared in an anthology, Batman Black and White, and I’m pretty sure it was my idea to make the thing a Christmas story and if you insist on my telling you why, I’d guess that I hadn’t done a Christmas piece in a long time and I felt like revisiting old turf. Maybe I shouldn’t even mention this because it surely wasn’t an annual anything: rather it was, as they say in the British publishing dodge, “a one-off.”

(An oddity concerning Batman Black and White: the book was conceived and edited by DC’s color editor, Mark Chiarello. And for those of you who haven’t seen it: yeah, every story in it was in black-and-white. And consider this a Recommended Reading. And finally, to end this windy digression – Mark, if Slaying Song was your idea, I apologize.)

Where were we…? Wondering if comics do Christmas stories anymore. Well, if they aren’t published, or if there are fewer of them than in days of yore, it may be because these stories, from Dickens onward, were focused on one day, a holiday, Christmas. Well, Christmas isn’t a day, not for a while now. A … what? Season? That’s closer. What it has evolved into, this Christmas, is something we don’t have a name for. Not yet. Shall we coopt a bit from an old Seinfeld and call it “festivus”? Or how about frumalackel? You like that – frumalackel? Sleep on it.

Frumalackel or Christmas, I’m not complaining. It is what it is – what it has become, and it is not wise to argue with reality, and so I won’t. Not this year.

Next year? Who knows?