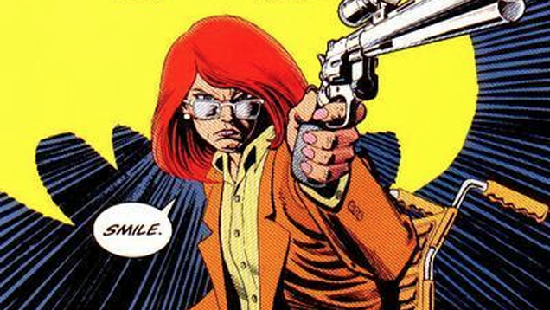 Warners has announced that they are making an animated feature of Batman: The Killing Joke, the 1988 one-shot by Alan Moore and Brian Bolland. Central to the storyline is The Joker shooting Barbara Gordon at point blank range with a large caliber handgun, then savaging her (she is later seen with welts and bruises all over her face), ripping off her clothes, possibly raping her, and photographing her. Some consider it a classic. Others are asking how they can make an animated feature that’s true to the story and more are asking why they are doing it.

The “why,” I think, is pretty obvious – the book made money, evidently continues to do well on the backlist, and the powers that be are presuming it will sell well as an animated feature. They are probably not wrong.

I’ve read many comments on the idea online including female members of the comics community and all the comments I’ve read are disgusted with the idea of the comic as well as the announced animated feature.

At the time that Batman: The Killing Joke was released, I was co-writing Suicide Squad with my late wife, Kimberly Yale. Don’t get me wrong; I was and I remain a big fan of both Alan Moore and Brian Bolland. Individually and together they have done stunning work. Moore is one of the giants of the comic book industry. He is, IMO, a better writer than I am and I don’t say that about many other writers (I have a very healthy ego and opinion of my own work, thank you very much). That doesn’t mean he can’t go wrong and I think that Batman: The Killing Joke went wrong.

In the controversial scene, there is the ring of a doorbell at the apartment of Commissioner Gordon. Barbara, all smiles and virtually going “tee hee,” goes to answer it. I should mention there is no chain on the door, no peephole to check who is in the corridor. There is evidently no policeman on guard duty in the hall. This is Gotham City, home of costumed psychopaths, and needs a vigilante dressed up as a bat to control the criminal population. James Gordon is the Commissioner of the Police and there are no safety measures where he lives?

Barbara opens the door. Barbara has been Batgirl and faced some of the costumed psychos inhabiting Gotham. She’s a grown woman who, in her own continuity, had been a congresswoman for at least one term. And yet she just flings the door wide open like a silly ninny.

There stands The Joker and he has a large caliber handgun. He shoots Barbara somewhere below the middle. From the angle, Kim and I thought it was the spine although others think he actually shot her in the uterus. He then rips off her clothes, beats her, takes pictures of her (while her father, off panel, is held motionless by The Joker’s henchmen), and possibly rapes her. Kim and I felt that was strongly implied but, to be fair, it was not directly shown.

Kim and I discussed it. To have been shot at the close range, to have your spine shot out, should have killed Barbara. If not, Kim thought severe sepsis would have set in and Barbara would not have survived. However, in the story, she does. That’s a given.

How does that feel?

The Bat office was done with Batgirl at that point. Barbara no longer fit into their plans. Kim and I asked if we could have her and we were told that. So we re-created her as Oracle. To us, it was important that the act have consequence. We didn’t want Barbara to magically recover. Given the violence she had endured, we felt she would be paralyzed from the waist down and in a wheelchair. However, we felt she could still be a hero.

It was a given in Barbara’s continuity that she was also a computer wiz. I mean first class. So we gave her banks of computers and made her the info wizard of the DC Universe. It started in Suicide Squad with her advising Amanda Waller, although we didn’t reveal Oracle’s true identity at the beginning. We left clues and, eventually, we showed it was Barbara.

Kim and I felt that, if we did the job well, Oracle could become an important part of the DCU. It solved writing problems for other writers; how did their protagonist learn a necessary plot point? They went to Oracle. She went on to become a valued member of the Justice League and led the Birds of Prey in their own book.

The last story that Kim and I worked on together before she died was Oracle Year One, drawn by the wonderful Brian Stelfreeze. We showed that year as Barbara made the transition from broken hero to dynamic Oracle. She became a strong and much loved icon for the disabled community. In making her a hero again, Oracle allowed others to heal with her. The reader healed with her.

Eventually, DC returned Babs to Batgirl status. Her spine was healed. Gail Simone was offered the job and she took it; she knew they were going to restore Barbara whether she wrote the series or not. She could, and did, make the events of the Killing Joke and Oracle a part of Barbara’s backstory; it wasn’t just forgotten.

It has been suggested that someone else could become Oracle but, to my mind, that wouldn’t work. You can’t just put anyone else into that role. It was the fact that she had been Batgirl, that she was Jim Gordon’s daughter, that she had her own long history, that she suffered the events of The Killing Joke – however heinous – all contributed to who she was. I don’t think anyone else but Barbara could be Oracle for the character to have any meaning.

I don’t know how all that gets fitted into an animated feature. I’m also not sure what parental response will be. It’s Batman, it’s Joker, it’s a cartoon. Great for the kiddies, right? Except this sure won’t be Frozen. If they change what happens to Barbara, I’m not sure it will be The Killing Joke either. If it’s not, why bother?