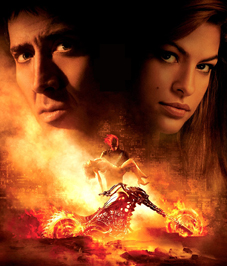 Sadly, this doesn’t seem to be a good time to be Nic Cage.

Two weeks ago, Cage announced he signed for Ghost Rider Two. That made Late, Late Show host Craig Ferguson very happy, as he absolutely loved Ghost Rider
One and the movie had a major influence in his selection of a skeletal
robot as his side-kick.

Before that we had Nic in Kick-Ass, which opened at less than $20 million. That was another well-promoted movie based upon a comic book series. Before that, he did a movie called Knowing which pulled in a slightly more respectable $80 million total.
Before that… Bangkok Dangerous, which did $15 million total. Total. Not
counting whatever revenue the movie is earning being on cable teevee every time I turn it on.

Next to the National Treasure movies, Ghost Rider was his best earning movie in a decade. All that’s a shame. I like Nic Cage, and I
feel I owe him because he’s been a big-time comics fan. But it’s been quite a
while since he was in a movie worthy of his considerable abilities. I hope he
can find better projects – there’s a great Batman movie villain inside him, just waiting to come out.