The Golden Age of Comics usually refers to the first period of massive super-hero output, roughly 1938 to around 1950, give or take. Super-heroes lost their following, and desperate publishers rushed to replace capes with westerns, romance, and horror – or all three, if they could figure out how to do it. Sometimes, decisions were made hastily and work was stopped mid-production, more often they printed off their inventory and moved on… sometimes to oblivion. 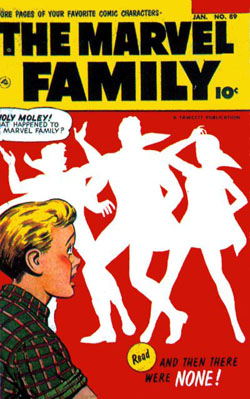 But there was an interesting phenomenon in which the “lead” super-heroes featured in or above the logo failed to appear on their very final covers. Here’s the ComicMix Six top golden age missing heroes covers. If we missed yours, please write in and let us know!

Number One: The Marvel Family

This is the most blatant example of the inadvertent trend. The Marvel Family – Captain, Mary and Junior (who were more like siblings than The Three Bears) are not only missing, but there’s white silhouettes where they were supposed to be! Again, this was the last issue, so they never reappeared on the cover of that series. And before long, The Marvel Family would fade to limbo due to poor sales and the weight of an unending lawsuit from DC Comics. An unfortunate ending to a proud family. 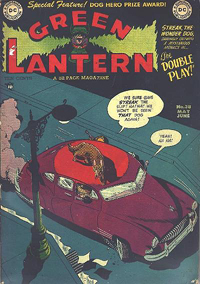 Okay, this really sucks. Try and tind Green Lantern on this cover, the last of his solo-series of the 1940s. You can’t, except for in the logo, which doesn’t count. He’s not on the cover. But his dog is. Just…his…dog. No wonder Alan Scott didn’t walk the dog over to the Justice Society. But if you think that sucks, here’s comes the real embarrassment. 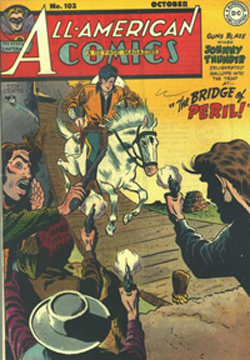 Wow, it sucks to be Green Lantern. Not only did he not make it to the final cover of his own comic, but Alan Scott didn’t make it to the final cover of the monthly anthology comic that was his birthplace! Yep, Johnny Thunder – who had taken over the cover position a few months earlier – is there preparing the way for next month’s name-change to All-American Western. The numbering was kept consistent, but the format change really didn’t work. In about two years, the title became All-American Men of War, again continuing the numbering until the Post Office figured out the scam and make DC start over. 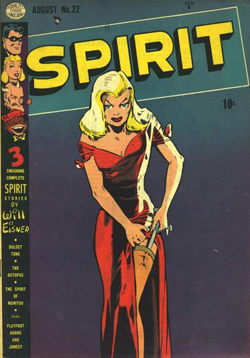 Okay, this was a reprint comic, reprinting stories that had appeared in the newspapers. But it counts. Will Eisner’s classic creation isn’t on the cover of his final issue (outside of the standard logo-area head shot), but, hey, in this case, who cares? A killer cover. Literally. 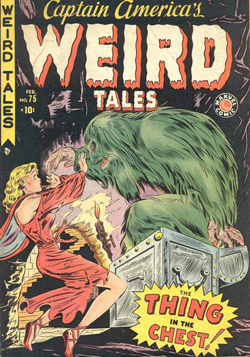 All right. I lied. The name of this title was Captain America’s Weird Tales, the second such issue although the numbering remained consistent from the classic series. Cap was on the cover of the previous issue – fighting the Red Skull no less – but here, in “his” final issue, he’s nowhere to be seen. Not just on the cover; he’s not inside the book, either. C’mon! This is Captain America we’re talking about! 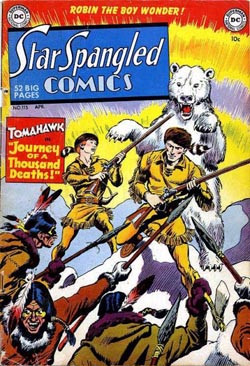 Robin the Boy Wonder had been lead feature in this title for years, often sharing his adventures with Batman. Good stuff; DC just finished reprinting all those stories in their Robin Archives series. But super-heroes were doing so badly (comparatively speaking) that the western/revolutionary war hero Tomahawk pushed him off the cover. And Tomahawk was about to get his own title as well! How greedy can you get? Picking on a little kid like that!