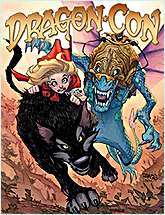 It seems like just yesterday I was getting back from San Diego Comic-Con…and now in less than two weeks, heeeeere comes Dragon Con! Another adventure!

Believe it or not, I still have some things to report from SDCC (yeah, I got a little behind, oops), but even though I’m still catching up from the last con, I’m super looking forward to Dragon Con! Why?

Well, for one thing, Dragon Con is my favorite con for costuming, outside of the Discworld cons. Not only do I get a kick out of costuming myself (as I’ve mentioned here before), but I also love looking at all of the amaaaaaazing costumes other people put together. From a Cylon with a real glowing spine, to an Archchancellor Ridcully with an actual flask in the tip of his pointy hat, to a pair of female “Spy vs. Spy” spies chasing each other around, any and every costume you can think of might make an appearance at the con, and the detail and creativity of many of the costumes just blows my mind.

The humor of a lot of them makes me happy, as well – from a group of gender-bent Disney princesses (complete with beards), to a couple of Spaceballs “combing” the bar-area floor with an actual giant comb, there are a lot of funny costumes to see. And then, of course, there’s one of the coolest costumes I ever saw at the con, which was done by my own roommate and friend Erica – a working Portal shirt with “portals” on the front and back, through which you could “see” to the other side. You never know what costume you’ll see next, and I love that.

I’m also super-excited, as always, about the awesome guests. Dragon Con is a great cross-section of the comics and genre TV and movie worlds, with guests from all over the spectrum. Also, of the cons I’ve been to, it’s the most comparable in its mix of guests to SDCC; but despite the huge crowds (57,000 people are expected to travel to Atlanta for Dragon Con this year), has a much more laid-back and less chaotic feel. Not to mention that with the Walk of Fame, you can often walk right up to your favorite celebrity to say hello (and buy a photo or an autograph, if that’s your thing). This year, I’m looking forward to seeing guests from Smallville, Once Upon a Time, Arrow, and Battlestar Galactica, among others. I’m also looking forward to seeing one of my favorite parts of any con, the animation and voice actor panels. Dragon Con has a lot of great voice actors coming this year, and those panels are always a blast. W00t!

Although this will be my third Dragon Con, there may be some folks out there for whom this is their first – and even for those who have been before, there are some new things to take note of this year. For that reason, I checked in with Dan Carroll of Dragon Con to see what he could tell me about this year’s con and how to enjoy it. Here’s what he said.

What are your top three tips to help new Dragon Con attendees get the most out of their experience?

1) Use the App! (Which you can get for Android or iPhone.)

3) Have a plan for Dragon Con and find your way around as quickly as possible. Be flexible in your plan because you can’t see everything.

How does Dragon Con differ from other cons?

Dragon Cong brings together gaming, film, TV, comics, live music, a film festival, an art show, and the largest parade in Atlanta for a 24-hour-a-day event over four days in five four-star hotels and a great exhibition space.

What’s new and different this year, that veteran (and new) attendees should know about?

We have upgraded our vendor facilities by moving them to the AmericasMart showroom and convention space. This move allowed us to add nearly sixty new dealers or exhibitors. The space in the Marriott where vending was, is now home to the Walk of Fame where we have space for twenty additional signing tables.

Our big celebrations this year are about anniversaries. The 50th anniversary of Doctor Who has brought a great range of Doctor Who and Torchwood guests, the 30th Anniversary of Fraggle Rock is being celebrated with two Fraggle actors and puppets performing in our Puppetry Track. The 20th Anniversary of Star Trek: Deep Space Nine is showcased with many of the original cast members and a lot of Star Trek luminaries including William Shatner and George Takei.

(Emily adds: It is also the 20th Anniversary of Animaniacs, as I’ve mentioned before, and Pinky and the Brain (Rob Paulsen and Maurice LaMarche) will be on hand for that!)

What tools are available specifically for Dragon Con fun?

As I mentioned before, the App is a great place to start. Each hotel has an information desk that provides excellent advice and guidance to the Dragon Con member. Other great tools are the Daily Dragon for updated information and Dragon Con TV for some serious belly laughs.

What are you most looking forward to at this year’s con? What do you recommend as a must-see activity?

What’s the best costume you’ve ever seen at Dragon Con?

I think the most striking I have ever seen is a 12 foot tall Galactus. My favorite is probably when I see my favorite comic book character, Marvel Girl Jean Grey in her 1960s mini dress and white go-go boots.

The easiest thing about talking about Dragon Con is that there is so much to talk about, which leaves me knowing that I am always leaving so much out. With 38 “tracks” of programming, each dedicated to an aspect of fandom, there is too much going to on to convey in a few sentences, so I invite everyone to come to Dragon Con and experience this amazing event for yourselves!

Well there you have it, folks! Some tips and info for new and veteran attendees, which will hopefully help everyone have as great a time at Dragon Con as I plan to have! And if you see me at the con, be sure to say hi!