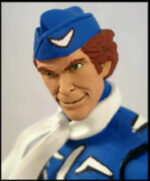 I was watching perhaps my favorite new TV show of the season, The Blacklist, last Monday. James Spader’s Raymond “Red” Reddington exacts a fierce revenge on those who wronged him. Reddington has done terrible things throughout the series and yet I find myself drawn to him, even rooting for him. I doubt that I’m the only one.

It’s not the first time for me. There was James Gandolfini in The Sopranos and, to an even greater extent, Michael Chiklis in The Shield. Who is the real center of The Dark Knight – Christian Bales’ Batman or Heath Ledger’s Joker? It’s a tradition that goes back a long way – the most interesting character in Shakespeare’s Othello isn’t the title character but Iago, the great and cunning villain of the play.

I really enjoy writing the bad guys as well. My favorite Star Wars creation? Probably the rogue and con man Vilmahr “Villie” Grahrk. Over at DC, I had a whole series centering on the villains – Suicide Squad. My faves among them – probably Amanda Waller, Captain Boomerang, and Deadshot. It’s not hard to spot. Hell, even John Gaunt, GrimJack, is not a hero except maybe by default.

So… what is the attraction? I am, by most accounts, a nice guy. So where does all this come from? The bad guys have to come from somewhere inside of me. Why are all of us attracted by the Joker, or Hannibal Lecter, or Raymond Reddington and the others?

Going back to my acting days, it was always fun to play a villain. First of all, they usually had the best lines. More important, I think the villains do things that you and I have atavistic urges to do, but our own conditioning, our own morality, keep us from acting on those urges. By identifying with the bad guys, by emotionally investing myself with them and their acts, I do the crime without having to worry about paying the price. I get the thrill without having to worry about the consequences.

I especially enjoy writing characters like Captain Boomerang. Boomerbutt (as others called him) was remarkably well-adjusted in a rather reprehensible way. He knew exactly who he was and he was happy with it. No angst, no desire to make himself better. Nobody liked Captain Boomerang more than Boomerang himself; it might be safe to say that he was the only one who liked Boomerang at all. He was fine with that as well.

Another secret of villains is that they don’t think of themselves, for the most part, as bad. They may think that the rules don’t apply to them but they feel they have the perfect right to do what they’re doing.

I don’t like every villain. Simple thugs and bullies – not very interesting. Same goes for the megalomaniac who wants to rule the world. Usually they’re pretty one note. No, give me the guy or gal with intelligence or at least a low cunning, a sense of humor, a worldview of some kind, a touch of theatricality and who has no compunction about doing what they do. Ah, that’s a villain I can sink my literary teeth into!