Emily S. Whitten: The Construction of a Convention Costume

Dragon*Con is right around the corner, and if you’re going and you like to costume at cons, that means you’re probably scrambling to finish up your costume(s). Well, okay, that’s true if you’re me, at least. See, I’d like to plan really far ahead, but Life just doesn’t make that possible sometimes, which is how I often find myself finishing a costume’s jewelry the same morning I’m putting on the costume; attempting to dye corsets to their “authentic movie costume color” at 3 a.m. in hotel bathtubs (in a leak proof plastic bag; don’t worry, hotels); begging people to lend me last minute bits and pieces; and occasionally even enlisting roommates to help me make things when really they should be downstairs eating the complimentary hotel breakfast (bless you, Erica).

In June I wrote a column on women and costuming, in which I made the point that there are numerous reasons women costume (as opposed to the often-posited-by-men-reason of costuming to attract a man’s attention). For me, the actual making or putting together of the costume, as complicated and time-consuming as it can sometimes be, is a main reason why I costume. I like the challenge of making something coherent and recognizable and as authentic or creative as possible out of bits and pieces of craft supplies and found items and regular store-bought items that I can adapt.

As I mentioned a couple of weeks ago, recently there’s been a great deal of talk about women and costuming from other quarters, including from people in the fandom who honestly ought to know better than to attack women about how they choose to celebrate their geekdom at a con, and whether they have the right to dress as they please without checking in with menfolk first (hint: the answer is yes). I don’t know why some geek men think they have some sort of prerogative to dictate these things, as if they were somehow “there” first, planting a flag on top of Geek Mountain and thus earning the right to lay out the rules and whine about people who don’t meet their “standards” of who should be allowed at a con or accepted as a geek; but it’s patently ridiculous.

Regardless, that kerfuffle was far from the first time the suggestion that women costume only to attract male geeks and get sexual attention reared its silly head. And both to further illustrate that suggesting this is pretty silly (because putting together a costume is a lot of work, and most women undoubtedly have to enjoy actually doing it, or they wouldn’t bother just for the minimal (supposed) payout of some random dude hitting on them at a con) and because I like talking about making things, let’s explore the process of producing a convention costume, and how I go about it.

I’ve talked about putting together costumes before, but for this column, we’re going to look at my biggest challenge for Dragon*Con: Arkham City Harley Quinn, and the steps involved in developing that costume.

The first thing I do with any costume is decide exactly how I want it to look. In some cases, some of the look is up to my imagination, because I’m going as a literary character who has a basic description but no picture (see: the young Duchess of Quirm), or a mythical character who’s already been interpreted in umpteen different ways (see: the Absinthe Fairy); but when I work from a character who’s been visualized, I like to try to stick to the image and get the details right. Therefore, for Harley Quinn, I spent, oh, countless hours on Google searching for every picture I’d need to get an accurate costume supply list. In Harley’s case, this turned out to be seventeen pictures from all angles and with close-ups for detail; and about thirty pictures of how other people were interpreting the outfit as a costume, to give me construction ideas. Then I study the collection and list out the individual costume pieces needed and each detail of how they are made, including for accessories and make-up. For the Harley costume, this list totaled approximately twenty-seven items, several of which are very unique – a fairly complicated costume.

Once I have my list, I need to make or find every item. Sometimes it’s easy – like buying white make-up, which is in every costume store. Sometimes it’s super-hard – like Harley Quinn’s complicated corset, which is hard to make and not similar to something you’d find anywhere else. Here’s how my quest for Harley’s bits and bobs is going:

The make-up is easy, and I’m about 2/3 finished with acquiring it. Since you can get all of it in places like Sephora or costume stores, I usually don’t worry about it first. The hair color and tattoos on the costume are harder; I’ve had to special-order colored hair spray, and am going to attempt to recreate the tattoos with a combination of rose temporary tattoos and face paint (since I couldn’t find any Joker temp tattoos that would work).

Harley’s clothes are pretty complicated. I knew from the start that the corset was beyond my skill to master in the time I had to try making it, so as soon as I settled on the costume, I searched around and found someone to custom make it – though I try to avoid that generally, because it can be pricey. As time went on I searched online for boots that matched the general cut of Harley’s and acquired them in black; to be adapted. I found a bra with the proper eyelet lace at yet another online store and speedily acquired it as well. For her pants and cropped top, I first thought to make them from whole cloth; then decided it would be easier to adapt ready-made clothes, and headed over to my favorite basic costuming bits store, American Apparel. There I acquired red and black tank tops and black leggings; to be adapted. I needed to get both shirt and pants from one store so the reds would be the same shade. Tragically, my local shop was out of the correct red pants. “No worries!” I thought. “I’ll just order them from the online store. Tragically again, though, the online store only had XS; which would be a pretty tight fit for me. Therefore it was back to the internets! until I managed to find what was apparently the one remaining pair in the proper size that would ship in time. Whew!

Harley’s accessories are a mix and match of easy and hard to gather. No matter how hard I tried, I couldn’t find leather cuffs with the correct pyramid studs; so I had to acquire the cuffs and studs separately. The gloves would be impossible to find ready-made, so instead I made a pilgrimage to JoAnn Fabrics, where I acquired bolts of the red and black pleather material from which the corset was made. The hair-ties will also be made from that. The buckled choker was found after much searching on Amazon, and had to be ordered twice after they ran out the first time. The belt chain was acquired at the craft store; and as I was writing this column I realized I hadn’t yet ordered the belt (oops!) and so went on over to get that (costume-making in real time!). Glad I’m writing this, or I might have left that bit until too late!

As you might guess, much of the above needs to be worked with or adapted to match Harley’s look. The pants and shirt are going to be hacked, slashed, and Frankensteined via experimentation into black/red combos; buttons from JoAnn’s will be added to the shirt, and the pants need diamonds, and have an additional weird brown belt-sort-of-thing that needs to be sewn on as well. The bra needs to be covered with the red and black pleather and stitched to match the image. The boots will be painted with fabric paint to match the color and design of Harley’s boots. Extra holes need to be added to the choker for proper fit. The pyramid-stud cuffs need to be assembled; and the gloves and hair-ties will be made entirely from scratch using the red and black pleather and elastic. In short – it’s a lot of work (but it will get done in time. I hope).

It’s always a good idea to try on the whole shebang before a con. Inevitably, something will not fit right, or won’t look right, or the make-up won’t be the right color after all, or something will fall off, or…who-even-knows what. I always try on the whole costume when I’m done, and things still sometimes go screwy on the morning of a con. So it’s really good to try to prevent what you can with a pre-con trial run.

I shall wear my awesome costume to a con and be so proud. Woo-hoo! 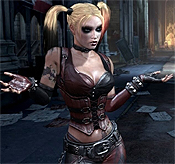 Well! As can be seen from the above, costume-making can be fun, but is also time-consuming and complicated. The more I do it, the more I realize there are things I can still learn about how to do it better. I hope some of you other costume-y folks out there liked hearing about my process, and I’m always interested in learning how other people make their costumes, or any tips and tricks they may have. Feel free to share in the comments.

And as for those (frequently men) who’ve raised the argument about women costuming for sexual attention in the past, or still believe that it’s a single motivator for women who costume; read the above again, think about how much time and effort people put into making their costumes, and instead of assuming you know everything about everything or it’s All About You, have a little respect for their hard work, skills, and creativity.

Until next time: Servo Lectio!