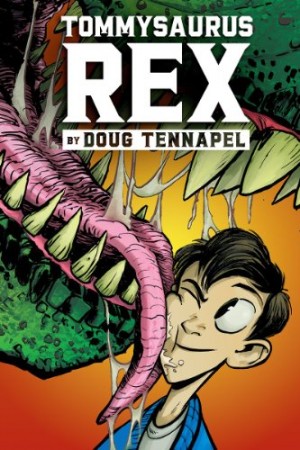 The concept of a boy and his canine best friend is nothing new at all and has provided us with countless heartwarming stories through the years. That the dog dies and is resurrected as a tyrannosaurus rex is a fresh spin on the story; one so fresh that in 2004 Universal bid $1million to preemptively option the property. I have no idea what happened with that, but it was based on an earlier version of Tommysaurus Rex, which Doug TenNapel released as a miniseries through Image in 2004 and then a collection in 2008. This month, though, a revised, expanded and apparently recolored version of the story is being released from Scholastic’s Graphix imprint.

Ely is shy, without a lot of friends, except for Tommy, the golden retriever who is his companion, friend, playmate and security blanket. Overenthusiastic in all ways, he pulls free from his leash one day and is hit by a car and dies. A distraught Ely is brought to Granpa’s nearby farm and in addition to learning about agriculture, he locates a nearby cave where, tucked behind some rocks, is a living T-Rex.

The dino-phenomena proves as loving and eager as a puppy and quickly Ely realizes its Tommy reincarnated. How Ely and Tommy win over a fearful and skeptical community forms the core of the story. Of course, there’s also antagonism in the form of Randy, lead bully but rather than be pure evil, we learn what causes him to act in such a terrible way.

Of the TenNapel works I’ve read and reviewed here – Ghostopolis, Bad Island, and Cardboard – this has the most heart and soul. It’s also his earliest work so the art style and storytelling is simpler. Everything is clear and the color adds a nice dimension with solid pacing, mixing pathos, drama, and humor. I’ve been usually critical of TenNapel’s story logic lapses and this has few of those although the fact that a dinosaur is wandering the world seems to attract minimal media attention and zero attention from scientists or the federal government. It doesn’t hurt that the Mayor, up for reelection and seeing the creature’s popularity, acts as a buffer.

Pare away the bullies and gawkers and this boils down to a boy loves dog story that can warm the heart and entertain. It’s an ideal volume for third through eighth graders and is well worth a look.