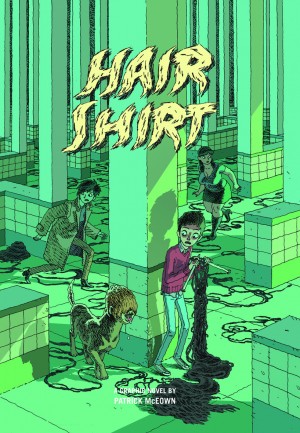 A second chance at love or happiness is often cause for celebration, but as Patrick McEown explores in his graphic novel Hair Shirt, it is not always for the best. From the murky cover color through the final page, the book’s emotional spectrum tends towards the dark and troubled.

We’re in a non-descript, unnamed city when John, a college student seemingly scared of everything, chances upon Naomi, a childhood friend who always represented the promise of more. As they take up with one another again, their other connections with the world drop away and McEwon tightly focuses on what they bring to the relationship and what they bring out of the other.

Growing up, John and Naomi’s older brother were best of pals, doing everything together. That is, until the family relocated across town for some unexplained by clearly sinister reason. Chris and John reconnected in high school and by then the damage was done; they were completely different people with little in common. Chris was a troubled adolescent, hinting at abuse which was masked through obnoxious behavior. As a result, John drifted towards a deeper, more interesting relationship with the shy, and equally damaged Naomi.

After Chris dies, a victim of a car accident, the mother and Naomi flee for the west coast and she vanishes from John’s life. McEown shows us that neither can fully let go of their personal demons but merely hints at them, without really showing us what makes them tick. As a result, the hair shirt he metaphorically knits, the symbol of penance, makes little sense. We’re at least given hints what happened to Naomi; what made turned John into an introspective loner is never explored or explained.

Similarly, McEown, whose work captured our attention with Grendel: Warchild and went on to a varied career that stretches from Disney Adventures Magazine to storyboarding Batman Beyond uses a very muted color palette from beginning to end. Despite the heavy paper stock, some of the pages are just too dark to properly make out what’s happening. The various flashbacks probably could have benefitted from

Neither character appears to have a direction with their studies, nor do they seem to attend classes or do homework, but instead try to figure out what has happened to them. Naomi is nowhere near as annoying or self-destructive as her brother, but the trauma she endured in the past also prevents her from properly loving John. Instead, she keeps egging him into a physical relationship with Shaz, a zaftig mutual friend.

Additionally, the razor thin balloon tails can disappear inside the dark colors so some of the conversations between characters can be difficult to follow. There’s a lot left unsaid and open for interpretation so this emotionally wearing story could benefit from clarity wherever possible.

This is anything but your typical romance given how damaged both protagonists are but it’s also hard to find someone to root for given how dysfunctional they are. For John at least, the story’s conclusion offers us a glimmer of hope while poor Naomi is left with her inner demons, the one person who understood her now driven away.

This is bleak, difficult territory and despite the dark colors, McEown’s artwork is emotionally evocative and his dialogue has a nice natural ring to it. Love is never simple but it’s clearly what most everyone is seeking, even in the dismal city where memories are as vivid as the people close by.