ALL PULP GUEST REVIEW-DR. HERMES REVIEWS A TALE OF THE AVENGER! 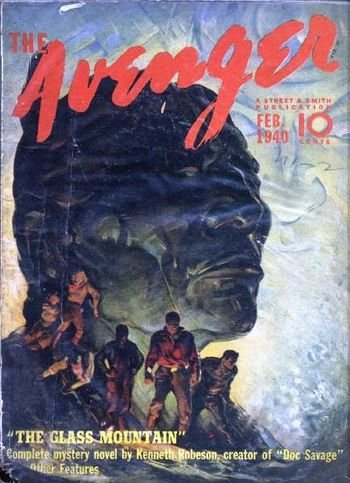 From May 1940, this is a good, solid Avenger story in the classic tradition. If the solution to the weird Rain God murders seems a bit obvious, it’s probably because we’ve read so darn many pulp thrillers. To an imaginative young reader first discovering this type of adventure, THE GLASS MOUNTAIN is filled wtth dramatic cliffhangers and creepy events, and a cast of larger than life oddballs.

An ancient legend seems to be coming back to life in a remote area of Idaho, where a railroad construction project is beginning to blast a tunnel through the black basalt Mount Rainod (the ‘glass mountain’ of the title), and a wizened Pawnee elder named Yellow Moccasins is doing his best by terrorize the workers by telling them the recent deaths have been the work of the Rain God that dwells in the mountain. Now, if you’re a fan of the series, you’re likely to suspect a rational explanation for the shenanigans. But on the other hand, we do witness a mysterious green mist twenty feet high repeatedly appear out of nowhere and elecrocute people dead in their tracks.

Although Rosabel Newton doesn’t appear (and isn’t even mentioned as far as I can find), Josh gets a bigger share of the action than usual. In addition to punching and running and diving into subterranean water to rescue people, he grudgingly takes on the chore of being camp cook for sixty workers. (He does a good job, too, and everyone loves his cooking.) Josh’s deliberate ‘dumb Negro’ pantomime works effectively , as crooks underestimate him enough to give him an opening to attack them. But his most notable moment is when he’s jolted by the green mist and is literally killed by it. Benson does manage to revive his friend (with some impromptu methods) before a critical amount of time has passed but it’s a harrowing event. The fact that a similar fate strikes Mac almost immediately afterwards doesn’t help. (Rubber shoes do, though.)

When Smitty teases him about his experience, Josh shivers and says, “Don’t even joke about it.” The big guy asks if he had any visions and Josh replies no, it was just like being unconscious. A good many pulp heroes are pronounced clinically dead and revived (It happened to Monk and Ham in PIRATE OF THE PACIFIC) but they usually seem to forget about it immediately as if it’s no big deal, and it’s unsettling to see Josh brooding about the experience as a person actually would.

Smitty and Mac are their usual selves, but Nellie Gray doesn’t shine very well in this story. Although she doesn’t turn up until halfway through the book, she manages to get bludgeoned unconscious TWICE in quick succession. I hope her dainty little skull was thicker than it seemed, or she would end up later in the series going, “Doy… uhh, hi dere.”

For some reason, Benson himself seems much more accessible than usual this time. He explains what he’s thinking and reacts to events more openly than his normal secretive way. When he impersonates the shady old Yellow Moccasins, he finds out that someone else is doing the same thing and for a while, there are three wrinkled old guys running around (the crooks are confused enough without stuff like this).

One touch I liked about the early stories was that The Avenger would occasionally run into someone who hadn’t seen him since his tragedy. Here an old foreman of his says awkwardly but sympathetically, “You’ve had trouble. I heard about it. Your wife and the little girl–” But he’s cut off by a cold glare from those eyes. Part of Benson’s problem, if you ask me, is that he never talked about his loss and he gruffly rejects any compassionate overtures from his old friends. It’s part of what makes him such a dramatic, intense fgure but it would have done him a world of good to thank this man for his concern.

Several times, in fact, we’re told that Benson doesn’t want to heal and learn to live again. He never considers suicide, but it’s explicitly said that he’s waiting for his life to be over so he can be reunited with his wife and daughter in the next world. Whle the Avenger never quite puts himself in the path of certain destruction, he comes awful close with all his deliberate walking right into traps. “Death could come any time it liked. Life wasn’t too kind, with wife and daughter taken from him in a criminal plot.”