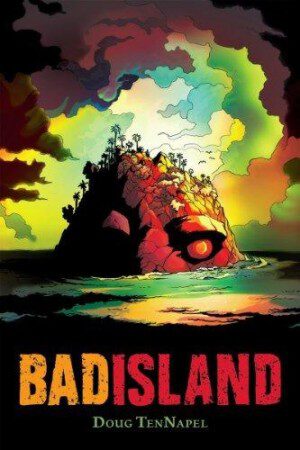 Author/artist Doug TenNapel impressed me last year with his Ghostopolis, a fresh graphic novel for young adult readers. He’s back this month with Bad Island and I am less impressed. He has an ambitious story to tell, actually two stories that parallel and intertwine at times, but the execution leaves a lot to be desired.

The biggest problem I have is that this family of four castaways on a mysterious island react unlike real people, constantly taking me out of the story to scratch my head and wonder how that happened. The family set out on an enforced bonding vacation that the eldest child, teenage Reese objects to. What aspires to be a three hour tour finds the tiny ship tossed by a storm that leaves the shipwrecked and the crew left on a deserted island.

Their efforts at survival are given incredible short-shrift with dad, Lyle, proving fairly inept. There’s an unrealistic calmness among the quartet with way too much focus from younger daughter Janie’s obsession over her pet snake.  That dad allows her to carry the snake corpse around is inexcusable.

When there is evidence that alien life exists on the planet, they accept this way too calmly so there’s a lot of running, screaming and activity without a great deal of rational reason.

On the other hand, the other story involves aliens but it’s still a story about a father and son. The tension between them remains the same as Lyle and Reese, but both are not well-developed enough to make you care.  He gives us an unbelievable human family contrasted with an alien reality that is woefully underdeveloped.

As hinted at on the cover, there island itself is a character in the story but I don’t want to give away some of the book’s obvious fun.

While the writing fails to work this time around, TenNapel’s art and storytelling remains engaging. The color, from Katherine Garner and Josh Kenfield and an army of ten, works exceptionally well, making the graphic novel pleasing to the eye. He and the colorists differentiate the island antics and the outer space thread making it clear to readers where we are and what is happening.

I wanted to like this more than I did, but the poor characterizations and leaps from logic robbed the book of its potential power.