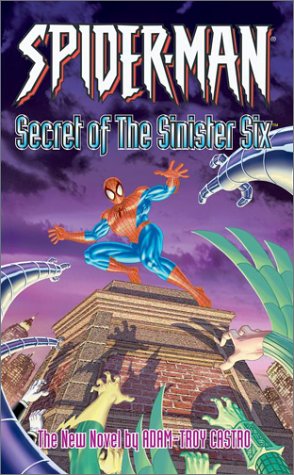 Marvel Comics announced today Spider-Man: Family Business, one of Marvel’s new line of original graphic novels debuting in May 2014. And if you’re a big Spider-Man fan, you may note that the story seems a bit familiar. Spoilers follow…

Spider-Man: Family Business, written by Mark Waid and James Robinson and painted by Gabriele Dell’Otto, introduces a woman to Peter Parker who says she’s his long-lost sister, Teresa. The two of them never knew anything about each other, and there’s lots of new backstory about Peter’s CIA parents, Richard and Mary Parker, and their deaths that orphaned Peter and put him in the care of his Uncle Ben and Aunt May.

If this sounds vaguely familiar, that may be because you read Marvel’s novel line at the turn of the millennium.

Adam-Troy Castro’s Spider-Man/Sinister Six trilogy— The Gathering Of The Sinister Six, Revenge Of The Sinister Six, and The Secret Of The Sinister Six— introduces us to a character known as Pity, who was raised from infancy by the Gentleman, an associate of the communist Red Skull who was intimately involved in prompting the contract killing against Richard and Mary Parker. Circumstances, including a photograph of Mrs. Parker pregnant a couple of years before Peter was born, make it look like Pity may be Peter’s older sister.

Adam-Troy Castro, who has received numerous Hugo, Nebula and Stoker award nominations and won a Philip K. Dick award in 2009 (and has occasionally contributed to this site) wants to make it perfectly clear that he thinks Mark Waid is one of the very best at what he does, and that he sees this as no more than the product of two separate creative minds, independently traveling in similar directions from the same source material.

He even illuminates this with a case from his own career:

“It has happened again, ironically enough with another spider. But again, I stress: there is no wrongdoing here, and I look forward to what the creative team here produces.”