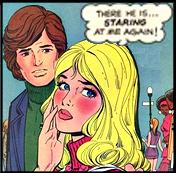 In my entire life, there were two times I didn’t hate it.

The first time, in the early 1970s, I was walking out of Central Park with my then-boyfriend. I was wearing a green halter-dress, as was the fashion of the times. There was a group of construction workers having lunch near the park entrance, and when I rounded the corner, one of them, seeing me, fell to his knees.

About a decade later, my husband and I were going to a Halloween party with a movie theme in the Village. He was some version of the Phantom of the Opera, and I was Marilyn Monroe. I had a white luminous plastic halter dress, white shoes (leftover from my wedding – see, you can use them again!) and a blonde wig. As we crossed Houston Street, a man got out of his car and proposed.

Being hassled on the street is part of being a woman. In these two instances, I thought there was a certain amount of spontaneity, some wit. But I still didn’t like it. I didn’t like feeling judged every time I ventured out of my apartment. It didn’t matter what I wore. I could be in sweats, in running clothes, in a down coat, in a suit for work or wearing my baby in a Snugli, and still men would feel entitled to tell me what they wanted to do to me.

Men don’t do that because they are overcome by love or lust at the sight of a woman. They do it to put us in our place, to let us know that the sidewalks belong to them, not us, and we are allowed to walk about because it amuses them to permit it.

Which brings me to comics.

It was my pleasure to be at Heroes Con over the weekend. A fabulous show, full of talented young people making comics, sharing comics, and selling comics. At least half the floor space is dedicated to Artists’ Alley, my favorite part of any show, and the presence of the Savannah College of Art and Design means there is a lot of talent on display.

I noticed that a large percentage of the artists (Half? I’m not sure) were women, certainly more than I ever saw when I first started to go to shows in the 1990s. Coincidentally or not, there is way less art devoted to T & A on display.

Utopia, right? We’re here, we have ovaries, get used to it.

At breakfast on Sunday morning, I was sitting next to a lovely group from Orlando. One of the two women took me about a dinner she had been to the night before. She had to get up and leave in the middle because a colleague had made a series of crude remarks to her.

Of course, even if she wasn’t married, he had no right to continue once she made her displeasure known to him. As humans, we occasionally misread cues and make the unwelcome pass. As humans, we can forgive one time. The fact that this guy continued indicates that he’s either really, really clueless, or, more likely, he was telling her that she was there solely for his amusement.

There has been a lot of discussion about gender issues in comics lately, by me and by my esteemed colleague, Mindy Newell. And it’s not just here, but at other sites as well.

And it’s not just comics. Female gaming fans are complaining more, noticing that the sexism they see around them is supported by the very corporations trying to sell them games, as if they can’t be demeaned anytime they want, and for free.

If you aren’t a woman, maybe you think this is a tempest in a teapot. Maybe you think, as a commenter on one of the links above, that the battle for Equal Rights is over, and that women are just looking for things to complain about so we can continue to be victims (because being a victim is so much fun). If you think that, you’d be wrong.

But, please, for the love of all that is fun in life, let’s change it.