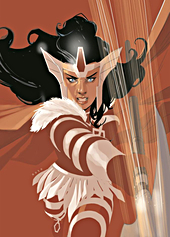 What is it about some men who feel the need to piss and shit on any woman who dares to display talent, smarts, ability, and imagination?

Why do they do this?

Last week, here at ComixMix, Sara Raasch wrote about the latest attack on a woman who works in comics. This woman dares to display talent, smarts, ability, and imagination. Her name is Kelly Sue DeConnick and she is the writer of Captain Marvel, Avengers Assemble, Ghost, Sif, Captain America and the Secret Avengers, just to mention a few. She was attacked on Tom Brevooort’s Tumblr site, New Brevoort Formspring in a statement by “Anonymous.” His thesis is that Kelly only got to write for Marvel and Dark Horse because she is married to the guy who writes Fantastic Four and Hawkeye. (Kelly’s response is on her own Tumblr site, Digital Baubles. Neil Gaiman also posted it on his Tumblr site, and several others did so, as well.)

The women in this industry respond to this crap in several ways – laughter, anger, ignoring the attack, blogging about it, writing columns about it, and sometimes taking the pusillanimous putz head-on (even notifying the police, in one case), depending on their mood and general disposition.

I got hit with this stuff, too, back in the day when I was writing in the industry. Someone accused me of getting assignments by “strutting the hallways in fish-net stockings and fuck-me pumps.” I was once told by someone at Marvel that, when I started working there as an assistant editor, it was assumed by most that I had been, uh, “especially nice” to Tom DeFalco, who was then Marvel’s editor-in chief.

You’d think by now, 50 years since Betty Friedan’s The Feminine Mystique was published, that the guano would have stopped falling from the sky onto our heads.

Erick Erickson of www.Redstate.com appears along with FOX newsman Juan Williams to discuss a just-released Pew Study that found that mothers are now the primary breadwinners in 40% of American households. Lou Dobbs finds this “troubling.” Juan Williams thinks “something is going terribly wrong in American society.” And Erickson says:

“I’m so used to liberals telling conservatives that they’re anti-science. But liberals who defend this and say it is not a bad thing are very anti-science. When you look at biology – when you look at the natural world – the roles of a male and a female in society and in other animals, the male typically is the dominant role. The female, it’s not antithesis, or it’s not competing, it’s a complementary role. We as people in a smart society have lost the ability to have complementary relationships in nuclear families, and it is tearing us apart. Having mom as primary bread winner is bad for kids and bad for marriage.”

And the shit just keeps on coming.