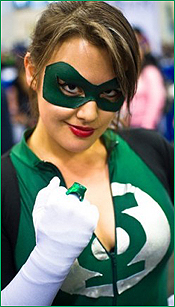 The other writer on the platform was Tony Bedard and he was getting most of the questions. We were at the Supercon in Miami and our topic was the Green Lantern.

What was Tony doing there? That’s easy. He was answering questions about the current status of GL and well suited to do it, was he, being the writer of The Green Lantern Corps, one of the GL spinoffs and a part of what has become, I guess, a franchise. Tony’s in the know.

Me? Well, let’s see…I wrote the character about 40 years ago, briefly, and I can retail a factoid or two regarding his early years, in the 1940s, and I saw the movie. But the recent stuff? Nah.

And that’s what our Miami audience was interested in, the current continuity, not the senescent blathering of a fossil about what was, to them, ancient history.

Be blessed, superconners. You were right.

The study of comics’ history is a legitimate discipline, and becoming more legitimate every day – as legitimate as the study of any, ahem, art form. But it has little to do with your enjoyment of the story that you’re looking at. And as Samuel R. Delany once suggested, neither does the discovery of “respectable” historic antecedents lend any valid respectability to the story you just bought. There’s a connection between comics and the German genius Goethe? (There is, isn’t there?) Well, okay. The expressionist painter Lyonel Feininger once did comic strips? Uh huh. Patricia Highsmith and Dashiell Hammet and Stanley Kauffman once did comics? Uh huh and uh huh and uh huh. Ancient Egyptian hieroglyphs and modern Chinese and Japanese writing bear resemblances to comics? Okay, noted.

But what about the thing in front of you?

There are a couple of ways creative types might use the past: as examples of what not to do and as a source of ideas. They might also use it as examples of what to do, but that’s creeping toward dangerous territory. We don’t want to rehash what we loved when we were fans/readers, regardless of how many hours it brightened. Rather, we want to give our audiences the same kind of pleasure we got from our predecessors.

Let us nod in agreement with the great haiku writer Basho: Seek not to follow in the footsteps of the masters. Rather, seek what they sought.

So our friends in Florida were behaving properly when they focused on Tony Bedard and kind of ignored me and, you know, it was pretty darn hot outside that hotel – just how mythic is that global warming? – and it was not excellent weather for crying, but, heck, we take our tears where we find them…