Dennis O’Neil: Superman and Me 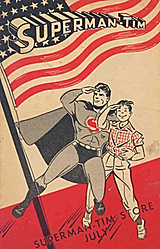 Or: it’s remembered images and sounds careening around the inside of my skull because, pay attention now, Superman and I go back a long way.

He’s one of the first fictional people I can recall meeting, though whether our first encounter was in one of the comic books Dad bought me after Sunday Mass or as voices emanating from Mom’s kitchen radio…the details of Supes’ and my initial acquaintance I do not remember, and who cares?

I next saw Supes on a movie screen, perhaps smaller and shabbier than the one mentioned in the second paragraph above, but serving pretty much the same purpose and.. Was I outraged? Disillusioned? Shattered? Or mad?

The problem was the flying. The grade-school me was anticipating watching the Man of Steel leave the ground and zip around he sky because… well, that would be an exciting thing to see. Then – the big disappointment. First the Easter Bunny, then Santa Claus, and now…What kind of bushwa was this? Superman goes behind a rock or something and then he flies up, up. and away. Only it wasn’t him flying. No, even to a kid it was obviously some kind of drawing, like the animated cartoons that often appeared before the cowboy pictures Iliked. Movie magic? Or a dirty stinky cheat?

But I wasn’t done with Superman, nor he with me. I won a story-writing contest that was fostered by the Superman-Tim club. Club membership, which cost Mom a dime, consisted of a card, a Superman pin and a monthly magazine that featured contests and jokes and puzzles and stuff. I don’t know how many contestants won prizes – maybe everyone who entered. And the prize wasn’t great: some kind of cheesy board game with cardboard cutouts that got moved. But hey – I’d gotten rewarded for writing a story! Wonder where that might lead!

Next came the Superman television show shown in St. Louis on Sunday morning well after Dad and I returned from church. Not bad. Okay way to kill a little time before the Sunday pot roast.

Then a long hiatus. Bye for now, Superman. Was it to be bye forever?

No. Years later, by then a freelance comic book scripter living in Manhattan, an editor named Julius Schwartz asked me if I’d like to have a go at Superman. I had some misgivings. Superman was… too establishment for me. Too goody-two-shoes. And too powerful. Melodrama turns on conflict. So how do you create conflict for a dude who could tuck all the gods of Olympus into an armpit, his suit apparently lacking pockets, and still have room there for the gods of Egypt and a few sticks of deodorant? Could I do that every month? I had some doubts. But I was a professional with mouths to feed and so I took the gig. Julie agreed to let me dial down the superpowers thing and let me make another change or two and off I went. For a year. I walked away from Superman and I’m not sure why. Just because I wasn’t enjoying it much? A lot of freelancers might consider that a pretty lame reason for dumping a paying gig and I’m not sure I’d disagree with them. But dump it I did and once again, sayonara Superman.

But never say never. I’m going to the movies, probably this weekend.