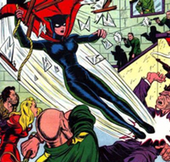 All guys are Sheldon Cooper. All girls are Kim Kardashian.

Needless to say, none of this is true. Not only is it a ridiculous exaggeration (which it is), but the initial assumptions aren’t true.

It isn’t even a societal expectation any longer. According to a new study, girls “are getting earlier and deeper access to (digital) devices than boys.”

The area in which it is not true is comic books.

Thank goodness there is more to comics than comic books like that. Unfortunately, it can be difficult for a new customer to discover other kinds of books when stores don’t promote them.

If these girls are like other readers of e-books, they will enjoy reading books online, and then want to own physical books as well. Will comic book stores be able to deal with this?

Successful bookstores don’t separate their wares into girls’ books and boys’ books. They rack them by subject matter and genre. They promote new titles and famous authors, true, but they also tend to “hand sell,” which means that employees will recommend books they’ve enjoyed to customers who ask. Publishers might use sex to sell (see Fifty Shades of Whatever), but they tend to use cover art that won’t embarrass the reader in public.

The comic book business would be smart to do the same. It might mean fewer women in refrigerators, and there are a lot of executives invested in that attitude. One would think that women with wallets would be a bigger draw.