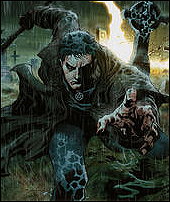 For Christmas this year one of the books I got was The Dresden Files graphic novel, Welcome to the Jungle. By that point, I’d read all of the novels; but what got me into them was actually the TV show.

When the show came out back in 2007, I remember hearing vaguely about it via a friend’s blog or two, but I never actually saw it. Thanks to the wonder of Netflix, though, a couple of years ago I discovered and watched it on streaming video, and enjoyed it enough to want to see more – but sadly, it only ran for one short season of 12 episodes. Thus I went back to acquire and read all of the books as well; and now, of course, I want more.

The TV show adaptation wasn’t perfect, but it had a lot of positives, the first three being Paul Blackthorne as Harry, Valerie Cruz as Murphy, and Terrence Mann as Bob. All three actors did very well with the material they were given, and just as important, had excellent character chemistry with each other. Their acting made the friendships (and possibly more, in the case of Harry and Murphy) feel natural, and anchored the crazy storylines happening all around them.

Another thing it had going for it was that Paul Blackthorne has the acting chops to carry a humorous narrative voice-over without it getting tedious (and I am behind on the current episodes, but for an example of When Voice-overs Get Tedious, the first several episodes of Arrow unfortunately come to mind). Blackthorne (who is also on Arrow, funnily enough) kept the energy of the show going with his engaging portrayal of Harry Dresden, much of which felt like it came straight from the books. The writing was also fast-paced and fun.

One area where the show went wrong, I think (or, more accurately, didn’t go right far enough) was in whatever concessions it made to watering down the lore of the books for primetime. Granted, it seems that genre shows and movies have gained more mainstream acceptance in recent years (comic book movies and shows like The Vampire Diaries, Supernatural, True Blood, etc.), and in 2007 maybe a genre show was a harder network sell and required some compromise (I don’t know), but I firmly believe that any time you tell a story well, and can draw the viewer in, the viewer will be able to handle and possibly embrace the complexity. And despite my dislike of some of Harry’s tiresome views on women, and the blatant male gaze readers are forced to sit through on occasion (particularly in the early books), The Dresden Files books are good, smart, complex stories, and should be adapted as such.

As I said, the TV show only lasted one season – and whether it was from creative choice or Firefly Syndrome (network meddling), it didn’t delve into or only briefly touched on a lot of the cool things that anchor and drive the direction of the books, like Harry’s past and progression in magic, or his place on the Council of wizards, or just how good he really is at magic and how that looks to outsiders.

I think one reason it just slightly missed sometimes was in this “not going far enough,” so to speak – because, for example, part of the charm of Harry is that he’s humble enough to know there are more powerful things than him out there and to be properly frightened of them 90% of the time; but whenever we see him through others’ eyes or whenever he really gets going with his magic…we the viewers get a glimpse of the discrepancy between Harry’s inner uncertainties and his bombastic power. And that can be a lot of fun, but was only shown rarely in the show.

For much the same reason that I enjoy, e.g. an episode of Supernatural where the FBI agent hunting the Winchesters because he thinks they’re nuts finally discovers that, in fact, demons and all manner of other creepy creatures are real, I enjoy stories that switch up characters’ points of view and give us different takes on the same situation, and particularly stories that shake up our, or a character’s, inaccurate assumptions. Reading about Harry dealing with Murph and trying to pay the bills and inner monologuing about how he’s not sure how he’ll make some spell work and all, and then e.g., going out and burning a house party full of vampires like it was no big thing, is that sort of story.

I say all of this to come back to the fact that last week I finally read Welcome to the Jungle, which is a visual adaptation that does well in this regard, and it reminded me of the times the show got it right, and of how much I’d really like to see more of The Dresden Files on television, or if not on TV, then in more graphic novels. Jim Butcher has said himself that he’s always imagined the series in graphic form. Despite the fact that I loved Blackthorne as Harry, I doubt a network would try to revive the old show. However, I could easily see a new adaptation being done; and I think if it, from the beginning, didn’t shy away from the more complex stuff, and embraced the big special effects as well as the small, it would be a truly awesome thing. I know that a new show is probably not likely to happen…but hey, a girl can dream, eh? So this is me, just dreaming a little dream at y’all. Anyone else think a new Dresden Files TV show would be cool?

Tell me if you do, and until next time, Servo Lectio!