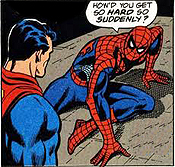 DC Comics is hiring a very anti-gay writer named Orson Scott Card to write for them.  That’s bad enough in my opinion, but they are giving him Superman to write.

Giving a guy who wishes gay people were wiped off the face of earth is one thing, but giving him Superman is just ballsy as shit.

The outcry in the industry is loud and clear. There’s a movement to have DC just fire the guy outright.

Let me be clear, I don’t think DC will fire the guy unless videotapes are found of him doing unnatural things with a German Sheppard… a girl German Sheppard, of course. I don’t want to offend him in case he’s reading this.

This is a win – win for DC. They get a pretty good writer and massive publicity so why fire the guy? When the book comes out they will get another round of colossal exposure so like I said, why fire the guy? For DC this is not personal, it’s business.

I say, let the guy write the book. Really.

If you want to take a stance against him and his views as I do, trying to get him fired is the wrong way to go about it at least I think so. Nothing short of a massive boycott will make a dent in stopping this guy from doing the Superman story.

But there is another way…

Take the writer to task at every turn. Make him own his views. Challenge him all the places where DC will send him to promote the book. Like comic book conventions, or any online forums, or any book signings anywhere he will show his bigoted face. Then the story is about his hated, his views and his failings as a human being. No company wants that shit following them around, over and over and over.

Trust me on this; I know first hand just how hard that sort of bad press hits corporate America. The way they are perceived by the public is easy to weather unless it keeps happening.

I like what DC is doing with its line these days. I don’t like to think that one of my favorite comic book characters is going to be written by a guy who would deny others their right to exist.

For me and I’m guessing many of you making his comic book journey miserable is not business, it’s personal.