REVIEW: The Sincerest Form Of Parody 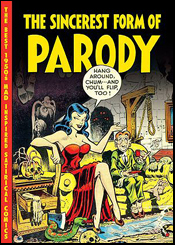 In the commercial arts there’s always been a fine line between tribute and theft, even when it’s called homage. These days, that’s a word that gets lawyers excited. But we are free to imitate the underlying concept or genre. When Harvey Kurtzman produced Mad #1, he didn’t invent humor, nor did he invent satire or parody. Anybody can try to be funny, and let’s be honest: comics publishers, then and now, aren’t trying to imitate somebody else’s comic book – they’re trying to imitate somebody else’s comic book success.

After EC knocked one out of the park with Mad, just about every publisher with an eye to staying in business (except DC and Quality; Fawcett had pretty much given up on comics by this time) came out with their own Mad clone… including EC. And EC was hip enough to satirize both of these facts. While some of the art in these would-be doppelganger publications is borderline superlative, they lacked the sharpness, the outrage and, simply, the sheer funny of Kurtzman’s Mad.

But there is certainly enough decent material to fill a tribute trade paperback, and that’s just what Fantagraphics did in their book [[[The Sincerest Form of Parody]]]. Edited by John Benson (of Witzend and Squa Tront fame). Over 150 pages of reprints, a brilliant back-of-the-book by Benson running 26 pages, and an introduction by my old buddy, cartoonist/historian Jay Lynch (by old, I mean we first met in 1968), this book is a welcome addition to any comics library.

Not that I minimize Benson’s task. I had a friend who got an entry-level editorial position at Playboy magazine back when the earth was still cooling, and his first assignment was to “edit” the party jokes page. That meant he had to open about a zillion envelopes a week, read all the so-called gags, and pick the “best” couple dozen for publication. If you’ve ever read Playboy’s Party Jokes, you can only imagine what all those other “jokes” were like. It’s a wonder he didn’t climb the tower and start shooting anybody wearing skinny ties and horn-rim glasses.

I imagine Benson was faced with a similar challenge. If not for the artistic endeavors of Norman Maurer, Jack Kirby, Joe Maneely, Bill Everett, Ross Andru and Mike Esposito, and Howard Norstrand, John might have climbed that tower himself. Lou Cameron and Bob Powell are missing from this column; both are missed.

As Benson points out, few of the Mad imitators survived more than four issues. Then again, four issues was a pretty standard run for comics in the crowded newsstands of the pre-Code 1950s: it took at least three months after off-sale to get decent circulation numbers, so after the loser first issue got its report card the publisher was faced with the prospect of pulling the third issue at the printer or maybe printing off the paid-for inventory in issue four… give or take. That’s why so many interesting early 50s titles such as Danger Trail and Tor were cancelled in their first year of bi-monthly publication.

So, if nothing else, The Sincerest Form of Parody saves you a lot of time separating the wheat from the chaff. But in and of itself, it is a very worthy book – entertaining on his own, and critical from a historical point of view. You should check this one out; order it from your comics retailer or from an online service. It’s scheduled for publication in March, and it’s already off-press.

The Sincerest Form of Parody, Fantagraphics Books, $24.99 in trade paperback.