Children are disappearing on a suburban street, and a certain being seems intent on making us…

FEAR HER
by Matthew Graham
Directed by Euros Lyn

“I can’t stress this enough – ball bearings you can eat…masterpiece!”

Three children have vanished in the course of a week, cars are cutting out in the middle of the street, and everyone has been reduced to paranoid panic.  Not a good state of affairs for the day of the opening ceremonies of the London Olympiad.  The Doctor and Rose arrive just in time to help, luckily.  There’s an odd residual energy in the spots where the kids have vanished, which suggests it’s not some common human crapsack.  One girl named Chloe stays indoors and draws.  She draws the other children in the street.  Just before they vanish.  …yeah, The Doctor and Rose made the same assumptions…

An alien creature, the Isolus, has latched onto Chloe and used her raw emotions from a lifetime of abuse from her father (now dead a year) to try and get back to its family.  The alien is too weak to do so, and Chloe doesn’t know how to help, so she draws the kids in the street, who get teleported to a nondescript somewhere else, to attempt to assuage the alien’s loneliness.  She has the power to create things in her drawings as well – she angrily crosses out over one drawing, and the scribble comes to life, and a huge and choked thing with the emotion of her abusive father is gaining power in the back of her closet.  The Doctor has several goals – save the trapped kids, separate the alien from little Chloe, help it get back to space… and crash the Olympics?

This episode is…bad. It’s a weak shadow of the classic Twilight Zone episode It’s a Good Life, with no real sense of direction. The alien is innocent and unaware of its effects, and we end up being more afraid of Chloe’s father, who’s been dead a year. The scene with them collecting up al the pencils and crayons in the house as if they’re knives is ridiculous, is immediately surpassed by the scene where Chloe reveals she’s got pencils hoarded inside her dolls like Ray Milland hid whiskey bottles. The acting’s good, the music is great, but the premise is just so blah, and the look of the crayon monsters so silly that there’s no surprise that this is universally considered the worst episode of the new series by a long length: Doctor Who Magazine did a poll of the 200 most popular stories of the show’s run, and this one came in 192nd, only barely beating out Paradise Towers.  By contrast, Daleks in Manhattan, the story that resulted in the Daleks getting put in the cupboard for two years, came in at 152.  Of course, that just beat out the sublime Love and Monsters, so I imagine no poll is perfect.  Even  the idea of a living scribble was even done before, and better, on an early episode of Foster’s Home for Imaginary Friends. In the episode The Trouble with Scribbles, it’s learned that scribbles are the almost universal form of babies’ first imaginary friends, and they mount up quickly. 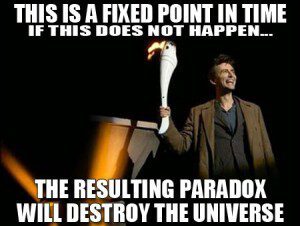 There’s a bit of fun in the beginning of the episode – the idea of 2012 being the “Near future” gave them a moment to to skewer new X-Factor winner Shayne Ward with a poster for a Greatest Hits collection.

But it was this episode that fueled Doctor Who fandom’s hope… nay, belief that David Tennant would be carrying the Olympic torch at the 2012 ceremonies.  Even after Matt Smith started it off in the relay, the desire for Ten to close out this little time loop was unassailable.  Indeed, in Danny Boyle’s spectacular opening ceremonies, there was originally to be a sequence featuring Doctor Who; each of the living actors had to authorize the use of their photos, but it was dropped.  The whooshing sound of the TARDIS, barely audible over the din of the mix, is the only mention.