TRAVIS HILTZ-Creator/Writer
AP: Welcome to ALL PULP, Travis and thanks for letting us grill you unmercifully.  Let’s start with the basics: who is Travis Hiltz? 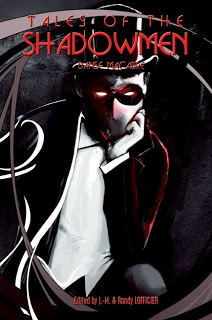 TH: Wish I had something really exciting to say here, like I was rocketed from a doomed planet or something. In reality, I’m just a regular guy who has read too many comics, science fiction paperbacks, watched too many cartoons as a kid and then decided to see if I could make any money off this writing stuff. I am supported by my loving wife and tolerated by my teenage children.
AP: Where do you live and what do you do to keep the bill collectors away?
TH: I live in the quaint little town of , in the wilds of . While I wait for the royalties to pour in, I work at Hannafords supermarket.
AP: As a writer, what influences have affected your style and interests?
TH: Pretty much everything: the ga-zillion comic books I’ve read, movies I’ve watched, books I’ve read, music I’ve listened to and occasionally stuff from the real world. I’m equally influenced by stuff that I hate and think I could have done better, as well as stuff I loved and seethed with jealousy that I hadn’t written.
Specific writers that have influenced me are : Douglas Adams, Philip Jose Farmer, Lester Dent, Robert E. Howard, Alan Moore and I think I’ll stop there, as I could probably do this all day.
AP: Are you a pulp fan?  If so, how has that affected you as a writer?  If you aren’t a longtime fan, then why pulp?  And what is your definition of Pulp?
TH: I’m a big pulp fan, got my start by discovering some old Doc Savage paperbacks at a library book sale and have never looked back. I think it’s had a big influence on my writing, as I like the larger than life feel of the heroes and adventures, as well as the exotic locals. I’m more a fan of the characters that have series, as opposed to stand alone stories. Captain Future, G-8, Doc Savage, and the Spider, guys like that.
As for a definition, I think pulp is guy literature, at its best and purest form. Its action, adventure, testosterone and very little time is wasted on romance and/or flowery language. The pulps are basically comic books, minus the pictures.
AP: Were you at all familiar with the Wold Newton Universe before you started writing stories set in that universe?
TH: I was. I’m a huge Philip Jose Farmer fan and had read several of his Wold Newton based books. I was thrilled to discover the website a couple years ago.
I was amazed that someone out there had enough free time to sort through and chart out all that info. It’s been a great resource for research for me.
AP: How did you get involved with TALES OF THE SHADOWMEN and Black Coat Press? 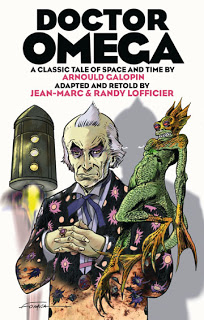 TH: I think I was tracking down books after visiting some website relating to Alan Moore’s ‘League of Extraordinary Gentlemen’ and one of the links was to the Blackcoat Press site. After buying a couple books and the euphoria of discovering a whole new world of characters I knew so little about, I discovered the ‘Shadowmen’ anthology and decided to finally take the big leap and pitch them a story.
Much to my happy surprise, they published it and I have now worked my way up to being listed as a ‘regular contributor’.
AP: Tell us about some of the stories you’ve written for TALES OF THE SHADOWMEN.
TH: My first, “Three Men, A Baby and A Martian” was a light hearted bit of sci-fi featuring Doctor Omega. He’s one of my favorite characters. He’s basically Doctor Who as created by Jules Verne and HG Wells.
“A Dance Of Night And Death” is a darker tale, featuring two of Blackcoat’s vilest villains fighting a duel on a rooftop in .
“The Treasure Of Ubasti” is an adventure, set in the deep jungles of and features a mix of characters on a treasure hunt. That was fun, as the setting of was suggested by a friend of mine and I then had to hunt around and find characters that would fit the place and time period.
“The Robots of Metropolis” also features Doctor Omega. I wanted to find a mad scientist to have him face off against. I thought, if he is treated as Blackcoat’s ‘Doctor Who’ then Doctor Omega needed a ‘Master’ to fight and I thought Professor Rotwang from Fritz Lang’s Metropolis would be perfect.
Would it be bragging of me to mention that Blackcoat Press has a partner publisher in France, River Blanche, and that I have had several stories translated into French?( http://www.riviereblanche.com/compagnons2.htm) I’m a under-published cult figure in two countries.
AP: What can we expect from you in 2011? 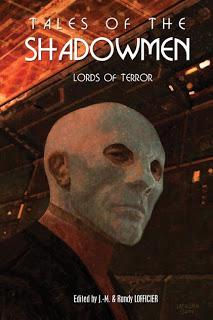 TH: In January I will send out my next story pitch for Blackcoat as well as having several stories published in the ‘Pulp Empire’ anthology (http://pulpempire.com/mag/) series.
“The Green Pearl” is a humorous noir story. “Death Stalks The Underground” has a bit of a Blackcoat vibe, as it is a team up between several characters, but these are all original characters, but easily recognizable as classic pulp archetypes and after that is my first ever attempt at a western.
I am also writing some reviews of comic book trade paperback collections (http://gelatisscoop.blogspot.com/2010/07/guest-post-by-travis-hiltzhercules.html).
As well as working on several pitches for two other small press, pulp based publishers.
AP: What’s a typical Day In The Life of Travis Hiltz like?
TH: Again, I wish I had something more exciting to tell you I wake up at the crack of dawn, get my kids off to school and my wife to work. Then either head off to work myself, or if I have the day off, I get my coffee, check my e-mail and try to get some writing done. These days are a juggle of attempting to get some writing done, working on whatever ‘to do’ list my wife has given me and then chauffering kids wherever they need to be. We always try and have family dinner. After kids are done with homework, I catch up on either my movie/TV watching or podcast listening. I try to keep some kind of writing schedule, but it’s nothing carved in stone. I don’t stress over it, as I know at least several nights a week my insomnia will kick in and I’ll be able to catch up.
AP: Thanks again for the interview, Travis and we’ll be looking forward to reading more exciting pulp from you in the coming year!
Share