* Quote of the day from novelist David Mack, talking about Sandman:

One story from that series, “Calliope,” continues to haunt me; a writer who tried to justify his crimes as a desperate search for ideas is cursed by Dream to be deluged with story ideas faster than he can write them down. In a handful of panels, the character rambles off nearly a dozen snippets of story concepts as he succumbs to a delusional fugue. What really haunts me about that scene is that Neil Gaiman tossed off a dozen story ideas as throwaway lines of dialogue that are all better than anything I’ve ever written. As a writer, I’ve never slept well since reading those panels.

This is all part of agent Lucienne Diver‘s weeklong discusion about comic books. Monday was Keith DeCandido‘s turn. I look forward to seeing who’s next– and slightly insulted she hasn’t asked me yet. 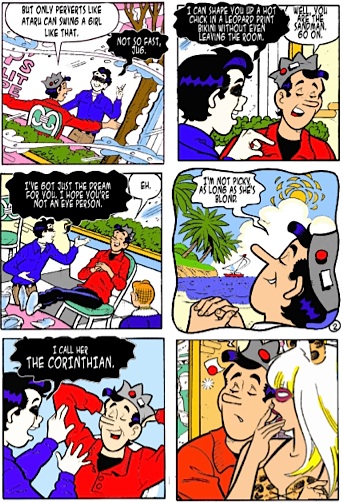 * Sandman, of course, is not to be confused in any way with Mr. Sandman, who, "though immortal and existing since the beginning of time, is your standard everyday teenager from the 50s. He enjoys such activities as going on dates with Calliope and Nada (rivals for his affection), meeting up with his old friend Jughead (a mortal granted everlasting life) at the same soda jerk every 100 years, and bringing into existence desirable new teenagers at the request of existing ones." Here, we see Mr. Sandman’s famous crossover with Jughead.

* This is ironic and deeply cruel: Unscrewed, which was formed to help comics creators who’d gotten screwed by a particular publisher, had funds embezzled by their former treasurer. Via Rich Johnston.

* TNT renewed the drama series Leverage for a second season, ordering 15 new episodes. Congratulations to show co-creator John Rogers, who won’t have much time to write comics any more, and the rest of the crew and cast.

* Hank Pym Is the New Doctor Who.

* And finally, our condolences to Scott Edelman on the passing of his father.