Review: “After the Golden Age” by Carrie Vaughn 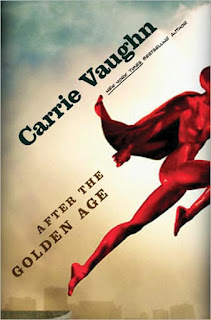 Carrie Vaughn is best-known for her “Kitty Norville” urban fantasy series — about a radio talk-show host turned reluctant werewolf — but she’s also written other things. Just last year, for instance, she came out with [[[After the Golden Age]]]

, a superhero novel about Celia West, the completely unpowered accountant daughter of the two most popular and powerful heroes of Commerce City.

So, the first question is: what comes after the Golden Age? Whether you’re Hesiod or Jack Kirby, the obvious answer is “The Silver Age.” And After the Golden Age is a quite Silver Age-y book, full of gangsters (organized into teams, with spiffy nicknames, and I would not be at all surprised if many of their gangs had dress codes) who politely kidnap Celia repeatedly in the vain hope of using her as a shield against her parents. (This is seen to never work, but — in best Silver Age fashion — the gangsters keep doing it, because they need to follow the essential Weisinger plots or else they are nothing.)

This is lucky for Celia; if this were an Iron Age story, she’d be in pieces in the fridge before page ten, and we wouldn’t have much of a novel. But she does live in a more genteel age, with defined standards of behavior for both heroes and villains, and so her kidnappings tend to just disrupt her schedule and horribly frustrate her.

(Vaughn lampshades the inevitable question: Celia doesn’t leave Commerce City because she doesn’t want to — sure, she has no relationship with her parents, and has a career that usually takes young public accountants through extensive travel around the country for the first few years of their careers, but, by gum! she’s going to stay right there in Commerce City because the plot requires it no villains will drive her out!)

The rest of the book is agreeably muddle-headedly Silver-Agean like that: Celia starts dating a young police detective, Mark Paulson, whose father is the city’s Mayor, with the usual obvious parallels between their parents. Celia’s ur-kidnapping was by the Olympiad’s (her parents’ superteam) greatest foe, the Destructor, as a young teen, and she ran away to join the Destructor’s gang not long afterward, in a fit of teenage pique at sixteen. (And this is endlessly brought back up throughout the novel, as though this was a superhero world in which no one had ever made a heel or face turn even once — let alone dozens of times a year, as in the modern era.) Celia is given primary responsibility to build a forensic accounting case against the Destructor (even though he’s old, possibly senile, and has been locked up in not-Arkham for a while now) as part of a major criminal case against him, for no obvious or specific crimes, and even though her multiple conflicts of interest would make any opposing counsel salivate at the thought. The whole plot, in fact, is entirely second-hand: it’s all standard superhero furniture that seems to be in this novel because it belongs somewhere in a superhero story, and not because Vaughn had specific reasons for wanting any of it.

Vaughn keeps it all going with her narrative voice, but it doesn’t make a whole lot of sense if you spend any time thinking about it. But, remember: in the Silver Age, stories aren’t supposed to make sense. Celia has more than the recommended level of angst, and is batted around by events — she’s supposedly driven and responsible, but her accountancy work isn’t dramatic, so Vaughn just mentions it now and then, and it really doesn’t add up to much.

Celia bounces off the supers of her hometown — her parents, Captain Olympus and Spark; Arthur Mentis, the telepath who was a late addition to their team; Annalise, aka Typhoon, a water-powered hero her age — as she slowly learns about the requisite sinister plot. And, of course, she gets kidnapped in the furtherance of that plot, but it all turns out all right in the end — city saved, true love found, the whole nine yards.

After the Golden Age is a pleasant if slightly musty-feeling superhero story; it’s based on several-decade-old tropes and doesn’t bear a whole lot of resemblance to what superhero stories look like these days. (Of course, superhero stories have looked horrible for much of the last two decades, so not looking like that isn’t necessarily a bad thing.) Vaughn makes it entirely an enjoyable read, but this isn’t a book to think too deeply about motivation or realism as you’re running through the pages.