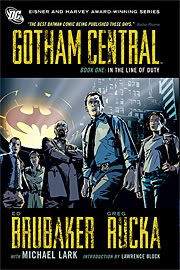 The Gotham police force has been around for pretty much as long as there’s been a [[[Batman]]]. But aside from James Gordon, the cops have always amounted to essentially cannon fodder, either dying at the hands of the rogues or vainly attempting to bring in the Bat during his various stints as a wanted man.

In other words, the cops have always only existed as extras in the blockbuster Batman stories. Writers Ed Brubaker and Greg Rucka flip that equation in [[[Gotham Central]]], starting with the cops — specifically the unit working metahuman cases — and only bringing Batman in as a vague background player, almost a deus ex machina who both enrages and inspires the force.

It’s not especially different from Brian Michael Bendis’ [[[Powers]]], except in how that series exaggerates policing for maximum bombast while Gotham Central more effectively captures the often droll, depressing and cynical atmosphere of a police department (In case you question my bona fides, I worked as a crime reporter for years). Collected now in a nice hardcover, the first volume of the series features two stories, one about the death of a cop and another about the public outing of Detective Renee Montoya.

With well-suited art from Michael Lark that firmly grounds the story, the writers drop readers immediately into a full precinct (it does get a little fuzzy keeping track of who’s who) as one cop is killed by Mr. Freeze. The obvious angle they explore is how mere humans can try to take down a bad guy with so much power, and how they resent Batman for always having to bail them out.

Thankfully the book goes much deeper than that, and Brubaker lends just as much pathos to these detectives as he does to his dealers, robbers and thugs in his series [[[Criminal]]]. None more so than Montoya, who is here developed as one of the most realistic lesbian comic book characters yet seen. In fact, her story, “Half a Life” was justly recognized with several awards. Sadly DC editorial later let that characterization drop in favor of hot-chicks-in-lingerie scenes in 52.

There’s a funny blurb on this book’s cover, saying it’s the “best Batman comic published,” which is both sad and true. One can only wonder if the team of Brubaker and Lark had been handed the Batman duties, instead of going on to bring their brand of realism and slick plotting to [[[Captain America]]].

And we’ll probably never know. But it doesn’t diminish at all what they and Rucka accomplished in Gotham Central.