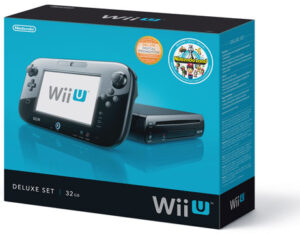 The Nintendo Wii U Deluxe Set, listing at 349.99, is already sold out before its release on the 18th

Nintendo of America today announced a benefits incentive program for purchasers of its new [[[Nintendo Wii U Deluxe Set]]].  By signing up with their Club Nintendowebsite and registering their system purchase, users will receive a ten percent “points rebate” on purchases of WII U made through the Nintendo e-Shop.  In addition, for each five hundred points earned in this fashion, users will receive a five dollar credit on future purchases in the eShop.

Club Nintendo allows users to earn points by registering their Nintendo purchases, and by taking brief surveys about the reasons for purchase and opinions on gameplay.  The points can be redeemed for downloadable games or collectible accessories.  High points earners are also eligible for rarer limited-edition items, made available for free.

This is the latest in a series of promotions intended to drive business to the Nintendo eShop. The release of [[[New Super Mario Bros 2]]] for the 3DS offered a 50 point Club Nintendo bonus for buying the downloadable version of the game.  Another promotion running now allows users to receive a free downloadable game with the purchase of one of a select set of new releases for the 3DS.  Nintendo does not offer their downloadable games at a discount over the store-bought versions, which makes them far more profitable to the company – while saving money on printing and shipping of physical media, they also receive the full price of the game, not just the wholesale price made if sold to a retail store.  It also eliminates the resale market – the downloaded games cannot be sold back to a store, and can only be transferred from one system to another a limited number of times. Special offers like this are clearly intended to make the digital purchase more appealing to the user.

With this offer, a fifty dollar or higher game would effectively earn an immediate five dollar rebate towards further eShop purchases. However, the final list of Wii U games available through the eShop has not yet been revealed; only four retail games have been announced so far, including NintendoLand, which already comes with the Deluxe Set.  Nintendo customer service reps have stated it will include their both “full-size” retail releases like New Mario Bros Wii U, as well as many smaller games at lower price points.  Their retail games are delivered on a DVD, which holds up to 4.2 GB of data. It’s almost certain most of their releases do not fill those discs to bursting; if they did, only about 8 retail games could be stored on the system’s 32GB internal storage. The system does support additional storage via SDHC cards, and while external hard drive support has been reported, no details are available.  So at the moment, the viability of downloading a high number of their retail games is questionable, rendering the ability to truly take advantage of the promotion somewhat limited.

The  Wii U Deluxe Set retails for 349.99, but is already sold out via pre-sale, and like many new systems, is commanding usurious prices via ebay and other secondary markets. It features, for an additional fifty dollars over the basic system, an extra 16 GB of storage, the game Nintendo Land, and additional accessories including  a  charging cradle for the new Wii U Game Pad.

While the promotion begins officially in December, all Wii U purchases made starting on the day of release (Nov. 18th) will qualify. Details on the promotion are being made available at the Nintendo site at http://ddp.nintendo.com/