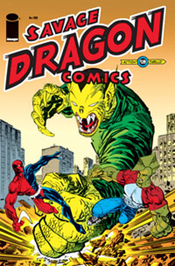 Spoiler Alert: In the current issue of Savage Dragon, writer/artist Erik Larson murdered a bunch of children. All I have to say about that is… it’s about time!

Larson’s book has been around about as long as Image Comics and presently is in its 188th issue, not counting crossovers, spin-offs and mini-series. That’s quite an accomplishment. It’s also one of the most consistently entertaining comics on the racks, and that’s even more of an accomplishment. He’s also a nice guy, but that’s only marginally important to my thoughts right now.

Back before there was Daredevil, there was Daredevil – in a sense, the world’s second homeless superhero. But instead of being homeless because his planet exploded went blooie, he was homeless because he was squeezed out of his own comic book by a group of know-it-all brats called the Little Wise Guys, a Bowery Boys-style knock-off that was introduced early on and swiftly reduced Daredevil to walk-on status in his own book. How cool were the Little Wise Guys? Well, they were named Curly, Jocko, Peewee, Scarecrow, and Meatball… and Meatball was killed off two issues later. I forget how, but I think it had something to do with marinara sauce.

Daredevil was one of the most visually interesting characters of the Golden Age, and that’s saying a lot. He was created by Jack Binder and immediately revised by writer/artist/editor Jack Cole shortly before Cole created Plastic Man and later enhanced by Charles Biro. I cannot fault publisher Lev Gleason for hiding the guy behind his wacky Greek chorus – we are compelled to assume they were the reason for the title’s continued success. The series lasted 134 issues, getting cancelled when the publisher went out of business. This was in 1956, the same year DC brought back and revamped The Flash. But Daredevil himself did not even appear on the cover of the last 86 issues.

Why they didn’t change the name of the book is beyond me.

Loyal comics fan that I am, I have always resented those little bastards. And, to my amazement and amusement, in the current Savage Dragon story arc Erik brought back Daredevil, his arch-villain The Claw, and the Little Wise Asses… and, rather early on in this month’s story, killed the obnoxious rugrats dead.

There’s a morality in Golden Age superhero comics, one that we’ve kind of lost over the decades. The Golden Rule of the Golden Age is “at the end, justice wins out.”

In this case, justice came from the mighty swift sword (well, computer and drawing board) of Erik Larson.