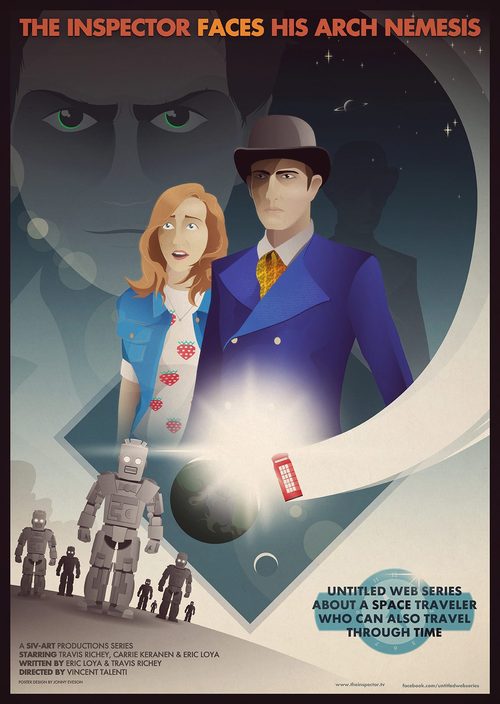 Inspector Spacetime is a self-paradoxical anomaly, which makes perfect sense.  It’s only existed for a few months, but has also apparently been on television for nearly fifty years.  Actor Travis Richey has played him for all of that time, for a grand total of less than two minutes of footage, and yet 11 actors have played the role, including Stephen Fry and Christopher Lee.  As Travis explains it, “The best part is, NOTHING is canon, and EVERYTHING  is canon”.

After the character made its debut as a brief Doctor Who parody on NBC’s Community, the Internet got right to work fleshing out his history and adventures.  A Tumblr feed was quickly created to serve as the main repository of the work, and photos from past episodes were quickly “discovered” and shared.

Travis Richey had a very good time at Gallifrey One, the country’s biggest Doctor Who convention.  At a panel dedicated to Inspector Spacetime, he announced plans to produce an independent web series dedicated to the Infinity Knight and his continuing adventures.

“Tony Lee (writer for IDW’s Doctor Who comic) reached out to me to do a video for Chicago Tardis (the Midwest DW convention) back in November” Travis explains. “I did that, and the greeting went over so well that Tony put me in touch with Shaun (Lyon) who does Gallifrey One.”

The panel was filled with fans and the panel “reminiscing” about their favorite moments of the show, including past Inspectors, and of course, the death of Jeffrey.  “There were jokes people were making that I hadn’t heard, like ‘Horse-Bot 3000’, and I was ‘ Huh? What’s that?’  But I do improv all the time, so I just accepted it, gave it a ‘Yes, and…’ and went with.”  He shouldn’t have been surprised; as is traditional the people starring in the sci-fi show don’t know NEARLY as much about the show as the fans.

What was amazing is that everything they discussed in the panel was all created from whole cloth on sites like the Tumblr blog, in a world wide improv session. Fans across the world agreed which jokes were funnier, went with the stronger material, and the mythos became cohesive amazingly quickly.  “One example of that was the word DARSIT, for the the Inspector’s vehicle,” Travis recalls. “I have to admit, I never really liked it; I thought it was too simple of a joke, from TARDIS.  But someone on the ProBoards came up with BOOTH, and everybody liked it, and not only did the change get made in the “canon”, but they have, I hear, retconned things so that “Darsit” is now an Infinity Knight curse word. And they’ve already started folding Boyish the Extraordinary, our bad guy, into the canon, so by the time we see him, it’ll be his return.”

The ability for fans to so easily collaborate on such a mad undertaking, couldn’t have existed only a few years back.  “It’s really extraordinary. I admit that I saw the potential, but my vision was so far from what actually happened, and how much it means to the fans.  And I think part of it is for fans to be able to actually have a hand in creating something new.  A lot of people don’t have the opportunity to create something new, so to be able to write something on the Internet, or submit a photo to the tumblr blog…it’s an easy way for the fans to be engaged, and I think that’s something that has been lacking. So in that respect, this is something totally new.

Travis saw the potential in the character while he was still filming that first episode.  “I wrote the script [for the web series] with my writing partner after I shot the first episode, but before it even aired.  We knew it was gonna be pretty big” Travis recalls.  “I’m a pretty forward thinker; I’m never happy just waiting for things to happen.  So my thought was, Hey, I’ll write this, and if there’s a second episode, I’ll tell them you should do this for the DVD or for web content.  Especially after the first weekend, when it just EXPLODED, so I knew that it was going to be something the audience wanted.”

“So I wrote this, and I brought it with me when I did my second episode, and the  word on set was ‘We can’t just look at it’. So I went back to my agent and said to submit this, because this is really huge, and we understand the character and the meme, and the world that the fans created’.  And he sent it in, but never got any response, one way or the other.  I certainly didn’t get a ‘no, don’t do this cause we’re doing it’, nor did I get a ‘yes’, or even a ‘Hey, this is good, but no thanks’.”

“But like I said, I’m not a person to wait for things to happen. I did wait, actually – I wasn’t going to anything while they were still working with the character.  As long as they had things to do with Inspector Spacetime, I was just, ‘Let that happen’.  But after the Christmas episode, I knew they were shooting the rest of the season, and they weren’t using me. And then the status of the show coming back at all was in question, and I thought, ‘At the very least, this’ll get some buzz, for Community, at least.  Plus, it was a case of me being prepared to take advantage of opportunities presented to me.”

Considering the reaction that 15 seconds of footage got, it’d seem somewhat surprising they didn’t want to do something more with the character, but Travis has a theory. “I think it’s more just how Hollywood works.  It’s very difficult to get a piece of writing into someone’s hand.  And I’m not sure why that it is, because Star Trek did it.  Some of the best names we know in Sci-Fi today, from Jane Espenson, to Ron Moore to Rene Echevarria , they all got their start because they sent in spec scripts to Star Trek: The Next Generation.  I don’t understand it.”

Like air rushing in to fill a vacuum, fans stepped up and created a full 50 years of history for this character, and hasn’t stopped.  “It was less than two or three weeks to form the basis of it, but over the last few months, it’s just continually been adding and adding and adding. It’s astounding the amount of creativity that exploded over the Internet, base on all of this three-line joke. And it was wonderful to see.  And that’s exactly the kind of person I am – I was a fan, at one point. I wrote Star Trek scripts in my bedroom, I wrote Doctor Who stuff.”

With all that creativity already in place, one has to wonder how much material did Travis plan to cull from the communal pool, and how much would be brand new? “When we started to write the first episode, it was before the fans even knew it existed.  Eric [Loya, Travis’ writing partner on his other video work, including Robot, Ninja and Gay Guy] and I spent hours going through the mythos and creating a rudimentary character bible.  We had to understand how it spoofed Doctor Who.  Cause the Community people didn’t really do anything.  They showed that Blorgons were Daleks, and they showed the red phonebooth. So we had to invent everything else. And then the fans came along and started doing their thing, I was actually involved in some of the fandom  – I was on the ProBoards, talking to people about what was what. “Infinity Knight” was mine and Eric’s invention [compared to the “Space master” term the fans have been using], the name of the home planet is fan-created, like that. What we have in the web-series is, I believe, 100% original.  We invented a new Associate; we’re not going to use Constable Reggie, and we have a new arch-nemesis we invented, Boyish The Extraordinary. We’re making a quick reference to the Circuit-Chaps [the fan-created Cybermen-spoof].  We took out the Blorgon reference in respect to the Community team.”

Science-Fiction shows are well aware of the fannish community, and know when to turn a blind eye to fan-made fiction, and even merchandise.  Travis thinks Community is aware of that as well.  “There are people posting mash-ups that use clips from the show; people are posting actual clips of the show,” Travis notes.  “The merchandise that people produce – not only for Community, but for Inspector Spacetime.  And nobody has told the t-shirt companies that they can’t produce the shirts.  And I want to be clear, we’re not selling [the series]. We’re going to make it, and it’s going to exist for free.  We’re not going to make DVDs, we’re not going to do ads on it on YouTube, nothing like that.”

Sony and NBC did decide that an outside entity producing an Inspector Spacetime series was a bit offsides, and sent Travis a request to shut down.  Luckily Travis had a backup plan just in case someone in the legal field got uppity. “Except for the name ‘Inspector Spacetime’, everything we have in the script is invented by us.  So there’s no reason this can’t get made.  And you can’t copyright a title…and they haven’t trademarked the name; I did a trademark search. Cause I want to be careful.  So hopefully they’ll let this happen. And more hopefully it’ll create some buzz for Community. Cause even though it’s coming back for the rest of the third season, there’s no guarantee it’ll be renewed for a fourth.”  The series will be titled “The Untitled Webseries About A Space Traveler Who Can Also Travel In Time”.  So we’ve got an unofficial adaptation of a parody show that only exists in the mind of its fandom…that sound you hear is reality folding in on itself.

The Kickstarter campaign, which made its $20,000 goal and them some, will cover the cost of the production.  “Frankly, I don’t have the capability to make it look and sound as good as it deserves to,”  says Travis.  “If you look at the stuff I’ve produced so far, it looks…okay, but you can tell that it was made with no budget. But here the writing and the acting is so strong, it really deserves to be be complemented by good equipment; a decent camera, lights and stuff.”  Travis schedule is pretty accelerated. He’d already posted a better-quality animatic of the first episode through the folks at io9, the same episode he did a live read-through of at Gallifrey One.  Principal photography is complete, and Travis is looking for a sound designer now.

NBC has also seen the potential in the character.  It was announced at San Diego that an episode of the new season Community would center around an Inspector Spacetime convention.  And the show (both Community and IS) has one other big fan – Karen Gillan, AKA Amy Pond on Doctor Who.  She’s already gone on record as saying that she’d LOVE to appear on an episode.   The irony is that in the continuity of the show, it’s her on-screen husband that would be a more logical fit.  According to the history, the character Rory Williams (played by Arthur Darvill) is the only one to appear on BOTH shows, moving from Inspector Spacetime to Doctor Who.

It seems that The Inspector’s possibilities are, rightfully, infinite.  It’s not WHERE he’ll pop up next…but WHEN.