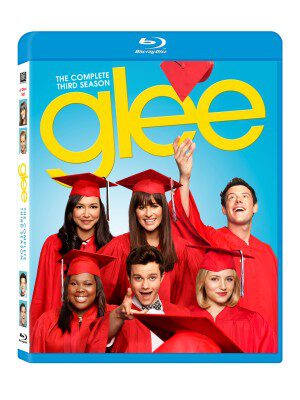 The greatest pitfall television series featuring high school cast members has is that the cast is already older when the series begins and they age out rapidly. Smallville stopped setting stories in the high school because the cast looked ridiculous on the sets. Confronting the inevitable graduation challenges the producers to find tortured ways to keep the cast intact after the caps and gowns are put away. Even Buffy the Vampire Slayer suffered from this challenge so it is refreshing to see Glee take graduation head on in the third season of the Fox series.

Glee the Complete Third Season came out on DVD last week and seeing it without the weeks-long breaks between cycles, allows you to see how they handled the coming graduation and choices the teens are being asked to make. While the series has never really focused on the kids’ academics, there was almost zero interest in ACTs or college visits, so it was always in the ether but never the focal point of the stories. Instead, it was all about getting to Nationals in New York and succeeding. The season opened with the need for fresh members thanks to a rival Glee Club set up by Shelby Corcoran (Idina Menzel) while Sue Sylvester (Jane Lynch) ran for Congress on an anti-arts platform.

Clearly, the producers had no real idea of where to take the characters as motivations and the status quo changed, twisting them beyond recognizabilty. The most ill-served may have been Quinn (Dianna Agron) who started off trying to steal back her baby, given to Shelby for adoption,  then embracing the final year of high school until her driving accident (don’t text and drive) and recovery. Somewhere along the line, this sympathetic character, who in season two recognized she was a small town girl stuck in Ohio, gained 50 IQ points and got into Yale and was Ivy League bound. Huh? The best teen villain has become a hero. All the edges to characters are gone, from Puck (Mark Salling) to the divas Mercedes (Amber Riley), robbing the students of interesting character variety. Santana (Naya Rivera) was also softened although her coming out as a lesbian and rising as a performer were among the season’s highlights.

Finn Hudson (Cory Monteith) and Rachel Berry (Lea Michele), the romantic couple at the center of the storm, decided to get married and their arc dealt with that reality and the choices each need make for themselves and each other. This rang far more true than the disastrous marriage between Coach Beiste (Dot-Marie Jones) and Cooter Menkins (Eric Bruskotter), which formed a mini-arc in the final third of the season.

While each of the 22 episodes is entertaining and often heartfelt, as a season-long arc for the faculty and students it’s a mess and by now Ryan Murphy should have a very clear idea of who they are and where these characters are going. Instead, he seems to have lost any sense of edge in Sylvester, giving her instead a rival in Roz Washington (NeNe Leakes). Even the show’s most intriguing character, Burt Hummel (Mike O’Malley), somehow found himself running for Congress and winning, stealing him from Kurt (Chris Colfer), just as his son’s dreams of going to NYADA are crushed.

Musically, the show remains strong, aided by the welcome addition of Darren Criss’ Blaine to the New Directions. Sam Evans (Chord Overstreet) is also back after a brief contract issue. Some of the winners of the reality series, The Glee Project, wind up added to the cast but are little more than hangers-on with little learned about them and rarely given a showcase. The quest for a championship takes a backseat to the fall musical, West Side Story, which featured some terrific reimaginings of the classic numbers.

In the finale, eight of the cast graduate and turnover in the New Directions will fuel the fourth season as it begins in a few weeks. Most of the graduates will continue to appear so the ensemble swells which is not always a good idea.

The four disc set looks amazing and of course sounds terrific but we’ve come to expect that from 20th Century Fox Home Entertainment. A neat feature to the set is that the menus will help you keep track as you work your way through the season, remembering where you are.

As usual, the extras are heavy on the music, the show’s hallmark. We get more from the Glee Music Jukebox, although you get clips and not the full songs that were edited to air. Some of the non-musical bits include “Glee Under the Stars” (7:45), a kickoff event at Santa Monica High School. “Glee Give a Note” (7:46) shows stars Jayma Mays and Jones present Culver City Middle School a check for $10,000 for arts education.

You can enjoy some extended and deleted scenes throughout the discs. The highlight here is a Sue Sylvester flashback that should have found its way on air. “Glee Swap: Behind the Scenes of ‘Props'” (5:41) is a nice look at the fun body-swapping episode. “Meet the Newbies” (13:20) spends more time with the new cast members than the series seemed to. “Saying Goodbye” (15:19) is a good look at the emotional toll the finale took on one and all. Lynch’s acerbic Sylvester is found on “Ask Sue: World Domination Blog” (6:07) and “Return of Sue’s Quips” (2:58).

One can hope that the freshened cast will ignite some greater dramatic consistency to match its musical excellence. For now, we have this set which is maddeningly enjoyable while being frustratingly inconsistent.