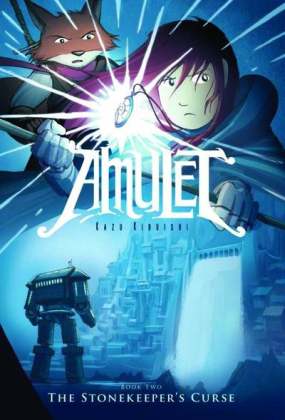 Kazu Kibuishi is a talented animator and comic artist who has produced several graphic novel series, including [[[Flight, Daisy Kutter: The Last Train]]], and now [[[Amulet]]]. The first volume came out over a year ago and now Scholastic has released the second book in the run. This book could have benefitted from a previously page for new readers.

The story is familiar as Emily Hayes discovers a necklace and amulet with magical powers. In the first volume, she and her younger brother Navin have adjusted to living in their great-grandfather’s home with their recently widowed mother. The amulet speaks to her, warning of impending danger which immediately results in a ghastly creature swallowing their mother. The chase is on to rescue her and book one achieves that goal, but she is gravely ill.

Book two opens as evil forces conspire to hunt down the children and obtain the amulet, while they, in turn, seek a rare fruit to concoct a potion to save her life. Their journey brings them into close contact with many humans who have been slowly evolving into animal/human hybrids, part of a curse that threatens all humanity. As a result, no one blinks an eye when Leon Redbeard, a fox-like bounty hunter arrives in the nick of time. He proves to be not only plucky, but wise as he recognizes that Emily is The One who will save the planet from the creeping darkness.

The story moves quite well as we go from lush landscapes to foggy forests in search of enlightenment and safety. With a Japanese-tinged style and terrific use of color, Kibuishi invites us into a world that mixes magic with technology, where robots and talking mystic trees operate side-by-side. The story moves quickly and you find yourself turning the pages with increasing speed.

The problem, though, is that Kibuishi’s story is nowhere near as inventive as his artwork. He admits that he studied [[[The Empire Strikes Back]]] repeatedly while working on this second volume in a projected ten-volume series.  It certainly replicates the feel of a second chapter, complete with advancing the story, adding some new characters, and exploring the backstory. The characters and pacing feel familiar and just when things look their darkest, the expected rescue comes in a comforting manner but it also lack tension and surprise. Even the struggle between Emily and the seductive nature of the amulet resonates of Frodo and the One Ring.

Emily, Navin, Leon and even the evil Luger and Prince Trellis all show us nothing new and play their roles like stock players.

While Amulet is engaging and a fun read, it doesn’t surprise us at all or present any new looks at the relations between siblings, friends or even families. No doubt, even the 9-12 year olds this is aimed at will not necessarily feel compelled to read the next chapter.