Review: ‘Wolverine and the X-Men The Complete Series’ 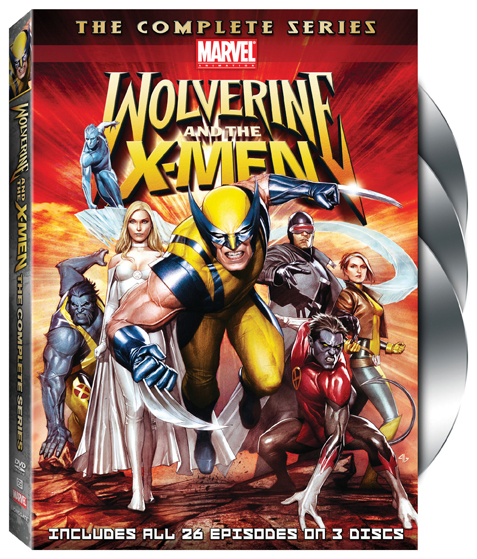 Wolverine and the X-Men was created to capitalize on the anticipated success of the Hugh Jackman Wolverine movie. The series aired on Nicktoons and freely adapted stories taken from the decades of [[[X-Men]]] stories. Despite being the title character, Wolverine was often taking a step back to let the army of mutants take on the stories.

Lionsgate has been releasing the episodes in low priced sets, but now, in time for the holidays, the entire series has been put in one set, now on sale. ComicMix has previous reviewed the final three releases in the series and overall, I have not been overly impressed. Visually, the animation designs are satisfactory but Marvel has never gotten a good handle on their voice casting and the show suffers for it.

Structurally, I previously noted “this has fewer sub-plots that require episode to episode viewing. On the other hand, there are plenty of sub-plots running through the 26 episodes comprising the first season. There are also dozens of characters to meet and recall and often they arrive unnamed or their powers unspecified. As a result, you’re required to watch knowing which version of the x-verse you’re paying attention to.”

Despite reasonably good ratings, the second season was canceled after work had begun so this set is all you will get. If you’re a fan of the characters or really liked the series, then this is for you.  Frankly, you’re better off with the original source material, all of which has been collected in one form or another.

Steve Gordon, Greg Johnson, Craig Kyle, Joshua Fine, Nick Filippi, and Boyd Kirkland mastermind the series and bring their previous Marvel animation experience with them. The writing is sharper than before In reviewing the final volume, I noted, “All the threads and main players throughout the season turn up and have their moment as the conflicting timelines and threads are woven together into a massive climax.” There’s even a final scene hinting at the direction of the second season that will never be.

Other than trailers, there are no special features on this set so it’s for collectors and fans only.