Glenn and Mike were at the movies – separately – just so they could have a heart-to-heart conversation about The Amazing Spider-Man. This time, each has a fairly different opinion.

Of course, there are spoilers ahead.

Glenn: So, this is going to be an interesting exercise. I believe I could hear your teeth grinding from Norwalk…

Mike: You liked it?

Mike: Jeez. I found only the last third the least bit tolerable. What did you like about it?

Glenn: The casting, for starters.

Mike: The casting was fine. But it was in service of a director who put everything he learned in community college up on the screen.

Glenn: Andrew Garfield won me over very quickly, with a naturalness that Tobey Maguire never quite seemed to have. Emma Stone could have carried the film even if she didn’t look just like a John Romita drawing.

Mike: The direction was amateurish and the script was worse. They’re lucky this wasn’t an adaptation of an Alan Moore story.

Glenn: I’m curious – what marked this as amateurish to you? The action scenes played fine, the character scenes worked to the actor’s credits – although I think the film may have trod a bit too much to the sort of aspirational stuff out of a Aaron Sorkin script… of course, that might have been a subconscious reaction to Uncle Ben Bartlett.

Mike: Gwen is the nexus of all coincidences. Her dad just happens to be a police chief in charge of the Spider-Man beat. She just happens to have an after-school job that gives her seemingly complete access to all areas and secrets of one of America’s largest high-science development companies – at 17 years-old – where she just happens to work for the arch-villain, who just happens to be the lab partner of the hero’s dead father.

Glenn: Yes, there’s a bunch of coincidences jammed there. But she was a science geek in the comics, just at the college level, and her dad was a police captain.

And yes, Connors and Richard Parker also happen to work for the upcoming big bad villain, too.

Mike: And all that was spread out over several years’ worth of comics. Here, this was all crammed into two hours – although, to be fair, it seemed like much longer. There’s coincidence, and there’s really bad storytelling. This is really bad storytelling. I really wanted to like this movie. Unfortunately, we knew two best actors weren’t going to make it out of the movie alive. There most certainly is such a thing as a great remake. The classic versions of Maltese Falcon and Wizard of Oz were both remakes. The Amazing Spider-Man is in absolutely no danger of joining this crowd. A remake has to answer the question “Why bother?” This movie, like the Superman remake, didn’t.

Glenn: Two best actors? I mean, we knew that Uncle Ben had to die. I can see a few reasons for retelling the story. For one thing, the effects work has improved a lot in places – the web-swinging in particular. Although the Lizard… well, you don’t always get it perfect. 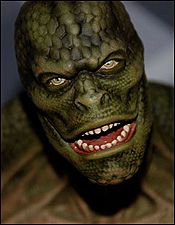 Mike: Yeah, and we knew the Titanic was going to sink. But the latest movie was about a lot more than the sinking of a boat; ASM wasn’t about anything we hadn’t seen before. Why didn’t they show us Spidey actually using his powers? The webbing thing was fairly cool, but outside of that we rarely saw him in action. He’d be on the ground and there’d be a quick cut to him stuck to the ceiling. Web-slinging through the Manhattan cityscape? Nope; it was mostly long-shots or Peter’s point of view. You don’t have to get the villain perfect, just menacing. Certainly the Goblin looked less-than-stellar in the original.

Glenn: Just out of curiosity, did you see it in 3-D?

Mike: No, 2-D. Which doesn’t address a single one of my storytelling and direction complaints. You rarely saw Spider-Man being Spider-Man. Not even if he pops out of the screen and eats the popcorn out of your lap, 3-D has nothing to do with storytelling. Certainly not in this movie. It doesn’t come close to the Sixth Avenue shots in the first movie. Talk about your John Romita influence…

Glenn: The action sequences, web-slinging, etc. worked for me in 3-D. The Lizard – well, it’s a giant lizard. Hoping for emotion in a lizard’s face is going to be an uphill battle, no matter what insurance company mascots teach us.

Mike: You don’t have to get the villain perfect. Certainly the Green Goblin looked less-than-stellar in the original. But the Lizard looked like the Hulk had pooped out a baddie.

Glenn: Of course, there’s a point. How many times can Spider-Man lose his mask in this film?

Mike: About as often as they want the 12 year-old girls to go all Beatles over Garfield. Who, by the way, looks about 30. Did they cast Garfield and Stone because Dwayne Hickman and Tuesday Weld looked too young?

Glenn: Yeah, college age would have been easy to believe. High school?

Mike: And Peter, Gwen, and obviously ol’ Lizzieface certainly weren’t New Yorkers in the least. Flash might have been, Ben and May and Stacy certainly were, but the three leads seem like they never even visited New York. Conners had been there longer than Peter has been alive.

Glenn: I don’t think the Lizard was a poor choice of villain. Curt Connors was played well… except for that “must turn evil” bit, and even there, it played in character more than Doctor Octopus’s character turn in Spider-Man 2. 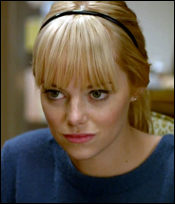 haracter for the original comics version that evolved over decades. In a two-hour movie (that played like an eight-day bicycle marathon), it was almost campy. At least Alfred Molena had the chops to pull Doc Ock off. I’d seen scarier villains on Doctor Who… in the black-and-white days!

Glenn: One thing that did work for me was the more naturalistic interactions between characters. Garfield and Stone clicked here in a way that Maguire and Dunst never quite did; for that matter, Garfield seemed more natural with everyone – Sally Field’s Aunt May, Martin Sheen’s Uncle Ben, Denis Leary’s Captain George Stacy, and even the crooks.

Mike: I agree, but those moments were brief. ASM wasn’t about the one-man Greek chorus, and that’s good. It’s about a 17 year-old, but only at times did they allow themselves to go there. Tell me. Did you like this movie as much this morning as you did last night?

Glenn: No, but I’ve had a morning that would make Pollyanna grumpy.

Mike: Did anybody applaud at the end? At my screening, absolutely nobody applauded. Not a one. Virtually everybody who wasn’t in the comics business left before the end of the credits.

Glenn: A decent amount of applause, nothing like the roar at the end of Avengers.

And I have to wonder how this plays in the rest of the country, since Spider-Man is really such a New York character.

Mike: That didn’t hurt the development and the success of Marvel Comics, which was almost entirely New York based for decades, and largely remains that way today. There was nothing particularly New Yorkish about the movie. It could have happened in Cleveland or Phoenix.

Glenn: There’s that same moment in this film that came in the first Spider-Man where New Yorkers pull together to help Spidey out.

Mike: New Yorkers like to think they live in the only city that pulls together in a crisis. It’s human nature. It’s what’s kept humans alive as a species. And wolves.

Glenn: Sadly, it didn’t work nearly as well as it did in the first one, mainly due to a big logic problem. There’s a helicopter right above him. Why doesn’t he just hitch a ride on that?

Mike: By the end of the movie I think only Flash Thompson didn’t know Peter was Spider-Man – and he was the one guy who should have figured that out, given all the scenes where Peter used his powers against him.

Glenn: Flash, despite his name, has never been that quick. And Aunt May – well, I don’t know if she knows or not.

Mike: I was never certain what Aunt May understood, except getting over her husband’s death right quick. Oh, and the costume really sucked. Seriously. Cirque du Soleil should stick to cribbing Mummenschanz.

Glenn: One of the nicer bits between Peter and Aunt May is there’s a lot of unspoken subtext there, with her obviously knowing there’s something Peter’s not telling her, but not knowing quite what – maybe that Peter’s suddenly going in for rough trade or something.

Mike: Sally Field handled each scene quite well; not once did I think “Flying Nun!” But together the movie made May Parker seem schizo.

Glenn: Was there anything you liked about this movie?

Mike: Denis Leary, both his performance and the way they handled his character.

Mike: This movie will do well opening weekend because opening weekend lasts six days and has a major holiday in there. But I don’t see it conquering the world. I can understand Garfield wanting to be in Avengers 2. He wants to be in a good super-hero movie.

Glenn: I’m still thinking Sally Field is too young to play Aunt May, but that’s purely a construct that carries over from the comics that has almost no logical basis. Of course she shouldn’t be old enough to be his grandmother, but still.

Mike: You’re absolutely right – if May was Ben’s husband and Ben was Richard’s brother, then Sally was the right age. In the comics Aunt May was born sometime before Barnabas Collins. I should point out I liked this movie more than most of my companions. One, who’s about 17, said it was the worst movie he ever saw. Ric Meyers (who thought less of this than I did) and I replied in unison: “You’re still young.”

Glenn: And ironically, my companion is one of the surliest bastards in comics and prose (David A. Mack, the killer of the Borg) and he enjoyed it even more than I did. This may be the rare film where I can’t easily say in advance whether or not a particular viewer will enjoy themselves.

Mike: Yeah, well I give it a thumb’s up – where the sun don’t shine.

Glenn: I give it a thumb, index finger, and pinky up. Which makes for a very tough review. But hey, kids, go and find out for yourselves.