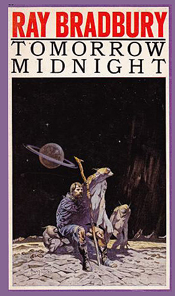 Ray Bradbury, generally considered to be among America’s greatest writers, died Tuesday night in Los Angeles. He was 91.

The author of such modern classics as Fahrenheit 451, The Martian Chronicles, Something Wicked This Way Comes and Dandelion Wine, Ray Bradbury was born August 22, 1920, in Waukegan, Illinois, on Lake Michigan near the Wisconsin border. From these placid roots came a gargantuan imagination that gifted the world with nearly 30 novels and collections of his 600-plus short stories, helping the fantasy and science fiction genre shake the coils of its adolescent, bug-eyed monsters and big-breasted blondes image.

Heavily influenced as a child by futuristic imagery of Buck Rogers, Bradbury maintained his enthusiasm for the comics medium. When EC Comics William M. Gaines publisher “inadvertently borrowed” one of his stories for adaptation, Ray sent him a polite note informing Gaines that his payment check must have been lost in the mail. An enduring relationship quickly followed, and Bradbury’s work was adapted by such great artists as Wallace Wood and Al Williamson.

On a personal note, I had met Ray several times – the first at the premiere of his first play, The Wonderful Ice Cream Suit, directed by Stuart Gordon (later made into a movie by Gordon starring Edward James Olmos, Joe Mantegna, Esai Morales, Gregory Sierra and Michael Saad). One of those great moments in life came when I was asked to share an autograph table with Ray at the San Diego Comic Con; we spent some time talking about his fellow Waukeganite, Jack Benny. He was a marvelous, charming man – a surprisingly opinionated man who, despite his reputation as a science fiction author (which he denied; he was a fantasist), Ray Bradbury declined to fly in airplanes.

He helped inspire the imaginations of several generations. I can think of no greater tribute.