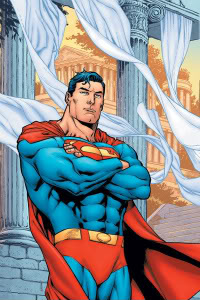 If you read this story in the Scottish Daily Record, you might think the next Superman movie is on the verge. After talking about the success of Wanted and other properties, Mark Millar essentially said he was doing a Superman movie and it was set for 2011.

"Since I was a kid I’ve always wanted to reinvent Superman for the 21st century.

"I’ve been planning this my entire life. I’ve got my director and producer set up, and it’ll be 2011. This is how far ahead you have to think.

"The Superman brand is toxic after that last movie lost $200million, but in 2011 we’re hoping to restart it.

"Sadly I can’t say who the director is, but we may make it official by Christmas.

"But fingers crossed it could work out, that would be my lifetime’s dream."

Kevin Melrose kept tabs on the claim as it spread through Millar’s message board, and seemed a little farther from reality with each passing day, culminating with "it’s not even close to happening yet."

There’s nothing new at all to grandiose claims from Millar that end up as bunk — this is the same guy who claimed Civil War was the best-selling comic of the past 15 years, then didn’t hold up his promise when proven wrong.

But there’s something about all this that really bothers me, as Millar seems to have a nagging habit of being reckless with the truth, if not outright pathological.

Take the claim that he’s "always wanted to reinvent Superman for the 21st century" since he was a kid. Except, he was a kid in the 20th century.