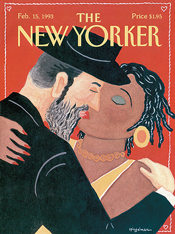 I am of the opinion that “bad taste” is a good thing. It’s the most ridiculously subjective concept imaginable: what offends me (admittedly, very little) might be absolutely awesome to you, and we each have a right to our opinions.

I was fortunate enough to be the editor and, along with ComicMix co-conspirator John Ostrander, co-conceiver of a DC Comics series called Wasteland. It was the black hole of humor, a monthly love-letter to bad taste. The stories usually had a point with enough wiggle-room in each concept to cause the reader night sweats. John wrote the series, often in tandem with improv legend Del Close, and we had a rotating gaggle of extraordinarily gifted artists as our visual collaborators. We’d have four going at any one time: three doing interior stories and one doing the cover. The one who did the cover in month one would do an interior job in month two, and so on. The artists usually came up with the cover concepts.

I only rejected one Wasteland cover. Drawn by Bill Wray, it happens to be my favorite. Those of you who are familiar with the Wasteland run might wonder just what it would take to cross my line. What it took was my concern for the continued existence of the comic book shop retailer: if not for the fact that we had to sell the thing, I would have published the cover about a hobo fishing off of a bridge into a sea of floating dead babies in a heartbeat.

(Just for shits and grins, I took it to editor-in-chief Dick Giordano anyway. He took one look at it, laughed, and said “You already rejected this!” I miss Giordano a lot.) 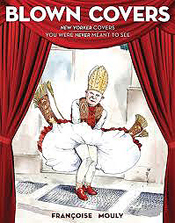 All of this is my way of reviewing a truly wonderful new book, [[[Blown Covers: New Yorker Covers You Were Never Meant To See]]] by Françoise Mouly, art editor of The New Yorker and publisher of TOON Books. Under her editorship, The New Yorker’s covers shifted rather rapidly from inoffensive fodder to litter doctors’ waiting rooms into a powerful agent provocateur lurking on the newsstands with the sole purpose of confronting our assumptions and values.

Well, not quite every week. Perhaps their most infamous of these covers rests atop this column; it is among the many that has acted as a pie tossed in the face of the pathetically uptight. Most of these covers are reprinted in Blown Covers…

… and so, as the title suggests, are many that didn’t make it. Most of those reprinted in this tome are certainly print-worthy, and to be fair, many didn’t make it because somebody else beat them to it, including Mad Magazine, which also employed the aforementioned Bill Wray. Some… simply… crossed the line. That inevitable, damned line.

Reading Blown Covers is great fun. Just looking at the pictures is great fun, but reading about the decision-making process should be de rigueur for anybody who thinks editing stuff might be a legitimate way to earn a living. Quotes from the artists abound.

My favorite of these rejects was one that wasn’t even offered for publication: it was done by Art Spiegelman, a frequent cover contributor and author of the Pulitzer Prize winning Maus, to his wife, the aforementioned Ms. Mouly. It was a drawing of a cattle car overstuffed with Jews on its way to a Nazi concentration camp. One guy was on his cell phone… and his über-cramped neighbors in the cattle car were annoyed and pissed.

Like I said, Blown Covers is great fun. Give it out as Christmas gifts to all your relatives.

THURSDAY: Dennis O’Neil and the Secret To Getting Hired In Comics!