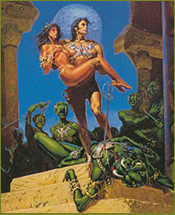 We finally trekked north to the monsterplex and settled ourselves to witness a showing of the flop before anyone was certain of its flophood. We did, and we left the theater and got into Mari’s car and drove south and were home.

We’d seen the film. And felt very little. We’d seen it and there didn’t seem to be a whole lot more to say.

Leaving the theater, I wasn’t irritated, or insulted. If I wanted to write a quibbly review I probably could – look ye hard and ye can find garbage, brethren; yeah, the writing was flattish and somehow the fabricated world seemed to be just a jot too fabricated. But nothing on the screen was godawful. The shots were in focus. The effects were okay. The acting was serviceable, except for that of Lynn Collins, whose performance was pretty interesting. (What would she do with Lady MacBeth?) The rest of it was what it was and –

Maybe that’s my problem. What it was was a heaping of déjà vu. I wonder how I would have enjoyed the flick if I hadn’t seen Star Wars in all its manifestations. I guess I can no longer be entertained by cinematic spectacle movies merely as spectacle, even when it’s in 3D. I’m sated with exploding spacecraft and after the baddies did in a whole planet in the first Star Wars…well, pretty hard act to follow, no?

Like a kid who’s been taken to one magic show to many, I’m jaded. (Another friggin’ rabbit?)

Here’s a scenario wrapped in a question: What if a temporal glitch moved John Carter back in time…oh, say, 65 years – moved it to the screen of a small neighborhood picture show (and there were a lot of them, back then.) The stuff we take for granted – exploding planets and the like–would have been absolutely astonishing because nobody would have ever seen anything remotely like it. What effect would seeing even a reel or two of a modern sci-fi film have on the minds of those who paid their money to see Dick Tracy’s Dilemma? (And isn’t that Joe O’Neil’s kid in the third row?) Would they immediately start a new religion? Would they go collectively bonkers? Or would they all go into a fugue state from which they would emerge only after Dick Tracy had reclaimed the screen and when they got home remember only Dick, believing that nothing had interrupted the detective’s pursuit of The Claw?

But wait! How do we know that this didn’t happen?

Allow me one more speculation: What if the memory of the time traveling flick wasn’t entirely erased, but survived as a nugget deep deep deep in some subconscious, a nugget that influenced the life of its host and drove him into a degraded life of writing science fiction and comic books? Wouldn’t that be strange? But – wouldn’t it explain an awful lot?

Wouldn’t it? Oh good lord in heaven..wouldn’t it?